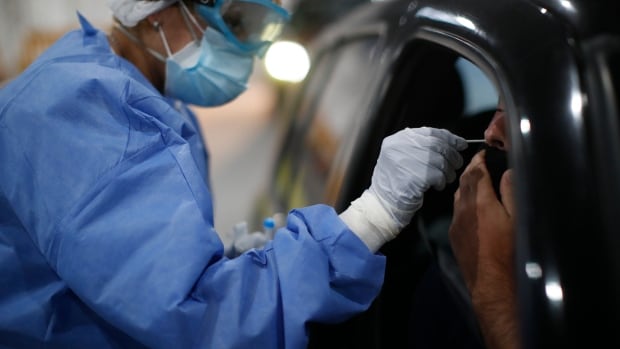 There are 203 new COVID-19 cases in Manitoba on Saturday and seven more people have died from the illness, the province says.

The latest deaths, which bring Manitoba’s total fatalities linked to the illness to 733, include a Winnipeg man in his 40s, a news release says.

A COVID-19 outbreak has been declared at Brandon’s Samaritan House Ministry Safe and Warm Shelter, the release says.

Barbara McNish, the executive director of Samaritan House, says she’s not able to share details of how many clients and staff have tested positive for the virus, in order to protect their privacy.

“We are working with public health officials and following all the protocols and safety things that they’re advising us to do to ensure that our clients, staff and the public are safe,” she said in an interview with CBC News.

McNish says both the food bank and shelter will be temporarily closed until management gets further direction from public health officials.

Starting next week, though, it will be offering food bank hampers in the parking lot to ensure people who need food can access it.

The shelter has been moved to the red, or critical, level on the province’s pandemic response system.

Saturday marks the third straight day the province has reported a daily new case tally higher than 200, after the number of tests done and cases identified dropped over the holidays.

Manitoba’s five-day COVID-19 test positivity rate dipped again to 9.9 per cent, the news release says. That’s a slight decrease from 10.1 per cent on Friday. In Winnipeg, that rate dropped to 9.4 per cent from 10.3.

The latest deaths include those of three Winnipeg women linked to care home outbreaks: two in their 90s, linked to the Saul and Claribel Simkin Centre and Deer Lodge Centre, and one over 100, linked to Oakview Place Personal Care Home.

Outbreaks previously declared at the Rod McGillivary Memorial Care Home on Opaskwayak Cree Nation and the Riverview Health Centre in Winnipeg are now over.

Of the new cases, 85 are in the Winnipeg health region, with another 54 in the Northern Health Region, the release says. The remaining cases are split between the Prairie Mountain (38), Southern (19) and Interlake-Eastern (seven) health regions.

The update comes a day after the government announced its public health orders banning most gatherings and the sale of non-essential items would be extended for two more weeks, following a spike in cases linked to holiday gatherings.

Sites where there have been possible public COVID-19 exposures are listed by region on the province’s website.

There were 2,181 COVID-19 tests done in the province on Friday, the release says, bringing the total number of tests completed in Manitoba to 437,412.

Manitoba has now identified 26,166 COVID-19 cases. To date, 20,769 people are listed as having recovered, while another 4,664 cases are considered active — but health officials have said that number is still inflated because of a data entry backlog.