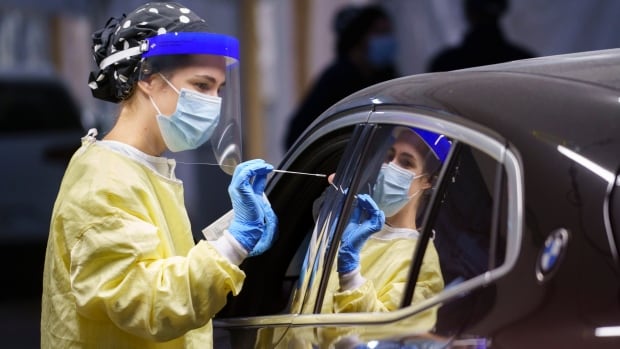 There are 251 new COVID-19 cases in Manitoba on Thursday and six more people have died after getting the illness, the province says in a news release.

More than half the new cases are in the Winnipeg health region, which has 142 infections.

There are now 316 Manitobans hospitalized after getting COVID-19, down by seven since Wednesday.

That includes 94 patients in intensive care, with 64 in Manitoba, 27 in Ontario, two in Alberta and one in Saskatchewan. Two additional COVID-19 patients were transferred on Wednesday to hospitals in Thunder Bay and London, Ont., the release said.

A total of 23 patients have been brought back to Manitoba after being moved out of province for critical care, including two people brought back on Wednesday.

The woman was linked to a COVID-19 outbreak at the Beacon Hill Lodge Personal Care Home, the release said.

A man in his 60s from the Southern Health region also died after getting an unspecified variant.

Manitoba has linked 348 more of its COVID-19 cases to variants since the last update on Tuesday, the province’s online variant dashboard says.

That includes 150 more cases of the alpha variant, which now makes up roughly one-quarter of Manitoba’s active COVID-19 cases.

It also includes one more case of the B.1.617 variant, a strain associated with India, and 197 more cases of variants still listed as unspecified, the dashboard says.

Manitoba has now vaccinated 70.2 per cent of its adult population with at least one dose of COVID-19 vaccine, the online vaccine dashboard says. For all Manitobans 12 and up, that figure is 67.8 per cent.

Manitoba’s five-day test positivity rate sank slightly to 11.1 per cent, down from 11.5 on Wednesday. In Winnipeg, that rate dropped to 11.6 per cent from 12.3.

An outbreak at Winnipeg’s St. Norbert Personal Care Home is now over, the release said.

Day services for adults with intellectual disabilities will continue to be suspended for another two weeks in Winnipeg because of continuing concerns caused by the pandemic’s third wave, the release said. Those programs will stay paused until June 25.

There will be some exceptions in cases where people’s safety can’t be managed in their residential care facility or at home during the day, the release said.

Manitoba has identified 53,650 COVID-19 cases during the pandemic, including 48,963 people considered to have recovered and 3,600 cases still deemed active, the release said.