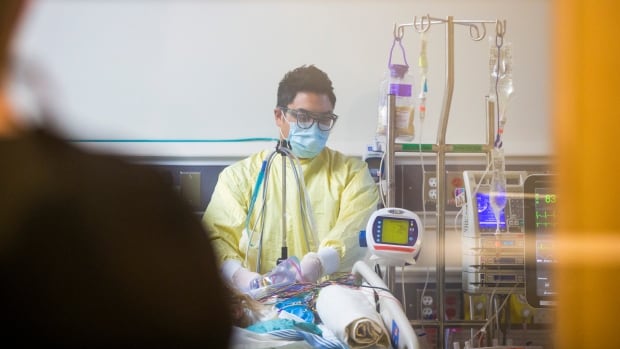 Four more critically ill COVID-19 patients have been moved to hospitals in Ontario as Manitoba struggles to create room in its strained intensive care units.

The province announced on Tuesday it is slowing down more non-critical surgeries effective immediately to allow the redeployment of nurses and increase its ICU bed capacity by six.

That means Manitoba now has 146 ICU beds, which is more than double the pre-COVID baseline capacity of 72.

The third wave of the pandemic is punishing Manitoba, which has now sent 18 patients to Ontario and is in talks with the governments in Saskatchewan and North Dakota about taking more, said Lanette Siragusa, chief nursing officer for Manitoba Shared Health.

Those jurisdictions are emerging from their third waves but also facing backlogs of surgeries and other procedures, so it is unclear how many patients they might be able to take, she said.

Ontario has said it would take a minimum of 20, with Manitoba patients now being cared for in Thunder Bay, Sault Ste. Marie, Ottawa, Sudbury, London, Windsor, North Bay and Owen Sound.

In the entire month of April, there was a total of 50 COVID-19 patients in ICUs, said Dr. Perry Gray, chief medical officer for Shared Health, speaking at the Tuesday morning technical briefing. So far in May, there have been 170.

There are nearly 5,000 active COVID-19 cases in the province, and 69 per cent have occurred in the last seven days, Chief Provincial Public Health Officer Dr. Brent Roussin said on Tuesday afternoon.

“Our hospitals are being stretched to the limits right now,” he said. “We need to stay home as much as possible.”

Gray, like many other doctors in the province, called Monday morning for tighter public health orders but most of all for Manitobans to comply with any rules that exist.

“We really desperately need this,” he said at a news conference on the acute care situation in the province before Roussin’s 12:30 p.m. news conference.

“This is not a forever. We just need long enough to get over 75 per cent of people vaccinated with at least one dose, but we really need it now.”

Roussin also spoke strongly about the need to bring down the case numbers.

“We have to take stronger action and take that action right now to end transmission chains, to bring down these case numbers,” he said.

However, Roussin didn’t announce further restrictions, instead urging people to adhere to the restrictions currently in place, which have been extended to Saturday.

The current orders were put in place for the May long weekend and originally set to expire on Wednesday.

There are 314 COVID-19 patients in hospital in Manitoba and the seven-day average case count has been above 400 since May 10.

That prompted a group of doctors to call on the province Tuesday to impose a stay-at-home order and close non-essential businesses to prevent further loss of life and critical illness.

The doctors said at a news conference that hospitals are so overwhelmed with people who have COVID-19 that patients are at risk of inadequate care.

Shared Health’s Gray said if the case numbers aren’t managed, there will be thousands more non-COVID Manitobans affected each week due to health resources being redirected.

He called those the “invisible patients,” the ones not receiving surgeries, procedures or diagnoses because of the shortage of health-care staff.

For instance, there are 20,000 fewer pathology samples being taken during the pandemic than in the years prior, Gray said. And every week, 900 to 1,000 people are not getting surgeries.

There are also people who are afraid to go to a hospital because of the pandemic and instead stay away and suffer in silence.

Gray also said anecdotally, several patients have turned up in hospitals with COVID-like symptoms but have refused to be tested for it, although he didn’t have statistics on the number of such patients.

With them, the assumption is they have it and they are isolated, Gray said.

Facing a situation like that “blinds us” because staff don’t truly know if it is COVID, he said.

He asked those who seem to not care about COVID to at least “care about all of the other diseases we’re not getting to” as a result of the demands on the system.

Siragusa, who was with Gray in the acute care media briefing, said there were 296 COVID-19 patients in hospital on Friday and 129 of them hadn’t gone for a COVID-19 test before being admitted.

On Monday, 12 patients were added to Manitoba’s ICUs and among them, 70 per cent were not vaccinated or had received the vaccine only days earlier and did not have enough antibodies built up to develop immunity, she said.

The same numbers were later cited by Pallister, who used them to reproach the public.

“There are Manitobans who did not bother to take an hour or two and go and get a life-saving vaccine,” he said Tuesday, accusing them of “not being part of the team.”

“Many Manitobans have chosen not to obey our public health orders and then have gotten sick,” he said.

“Too many of those people didn’t even bother to get tested for COVID, which means they placed other people in jeopardy. We need to change these behaviours.”

‘We were prepared’: Pallister

Pallister was asked multiple times why the province didn’t move sooner to deal with the increasing COVID cases.

He continued to fault those disobeying public health orders.

“They’re creating a problem,” he said. “And this is going to continue to elongate the third wave if those behaviours continue.”

He insisted Manitoba has more severe restrictions and has had them in place longer than any other jurisdiction, although it was pointed out that in other places, non-essential retail has been closed. Such businesses are currently allowed to operate at 10 per cent of occupancy limits in Manitoba.

“Ontario has 25 per cent capacity allowed in their retail stores, we have 10,” he said, which is not true. Non-essential businesses are currently only allowed to operate with curbside pickup in Ontario, which is already recovering from its third wave of the pandemic. Essential retail, such as grocery stores, is allowed to operate at 25 per cent capacity.

If Ontario can see their cases going down with less restrictions, the problem obviously lies with the rule breakers, Pallister said.

When challenged by reports from doctors who say ICUs have many patients who caught the virus at their workplaces, not from socializing and breaking public health orders, Pallister didn’t answer.

The premier was also asked why Manitoba waited until the province had the worst per capita infection rate in North America to ask for help from the federal government.

Pallister insisted “we were prepared” but that no one anticipated such high case numbers in the third wave.

He was reminded the province’s own modelling indicated the wave could be as bad as it is. In light of that, and Manitoba’s slow response, Pallister was asked if blaming the public is helpful at all.

“I think there’s lots of blame to go around … but when people don’t go and get tested when they have COVID, who else am I supposed to talk about?” he said.

“When people … don’t co-operate with a contact tracer and provide information on who they’ve been in contact with, how the hell are we supposed to stop people from getting COVID? There’s an element of personal responsibility here.