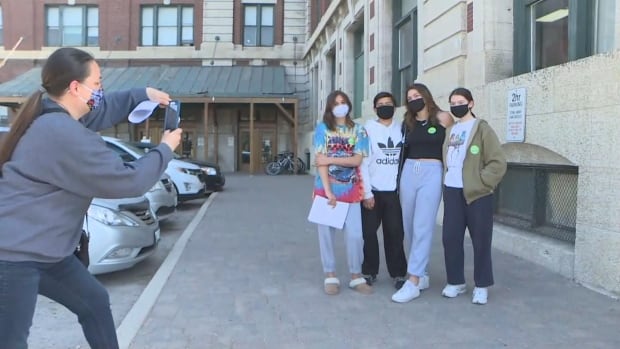 Charlene Hallett brought her three children and her niece to the urban Indigenous clinic on Higgins Avenue to be among the first teens to get their vaccines in Manitoba on Monday.

“We’re hoping by doing this eventually, you know, we’re doing our part so that we can all get back to, quote unquote, something more normal,” said Herrera.

The Manitoba government opened up vaccinations to youth between the ages of 12 and 17 on Friday.

“This is a very profound time for us to ensure that at this point in time, that our youth are becoming vaccinated,” said Dr. Barry Lavallee, health lead of Manitoba Keewatinowi Okimakanak, which advocates for First Nations communities in northern Manitoba.

Lavallee was one of the people administering vaccines at the clinic on Monday.

The clinic at the Aboriginal Health and Wellness Centre aims to make the vaccine accessible to Indigenous people living in the inner city. Drummers and singers were on hand to welcome the teens coming to get their shot.

“I just felt good getting the vaccine, knowing that I took my time, I waited patiently all these months, and it feels like my patience has been rewarded with the vaccine,” said Alexander Herrera.

Herrara and other teens at the site said they’re looking forward to getting back to hanging out with friends and participating in the activities they enjoy.

Hallett said it’s been a long time since her kids have been able to mark the milestones in their lives the way they used to.

“Especially for the kids, just to be home this long without interacting the way they would normally with their friends, going to the beach, having graduation parties for instance,” she said.

“That’s just things that would normally be happening that can’t be happening and we’re really looking forward to getting back to some of that.”

Having Indigenous drummers and singers at the site on Higgins made it a welcome space for Hallett, who grew up in the North End and whose sister runs the primary care clinic at the health centre.

“Just having that kind of good energy here, while we were here with the kids. They know those songs and they know that feeling from ceremony,” she said.

“I think that was so smart and wonderful and kind to do that, and it makes it feel more gentle in the space…. When the kids have a little bit of apprehension, that can help ease that a little bit.”

A record-breaking number of appointments followed the province’s announcement that it was opening up vaccinations to minors 12 and older, as 41,754 bookings were made just that day.

There are about 111,000 young people aged 12 to 17 in Manitoba, according to the provincial government.

Over the weekend, the province reached a milestone, as more than 50 per cent of adults have been immunized with at least one dose of a vaccine. As of Monday, 568,421 first doses had been administered.

Second-dose appointments will start no later than May 22, starting with people who are immunocompromised or have other prioritized health conditions, the province said.