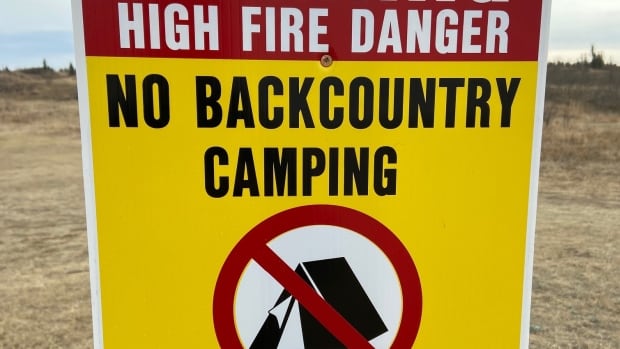 The province is imposing a wide range of fire and travel restrictions, including a ban on campfires in most provincial parks and throughout many parts of Manitoba, due to the extreme fire danger.

The restrictions will be in place as of 8 a.m. Wednesday, the Manitoba Wildfire Service said in a Tuesday news release.

Level 3 fire and travel restrictions will be in place for several areas in the province, including all of eastern Manitoba.

That means campfires are not allowed and all backcountry travel without a permit is prohibited.

Camping will be restricted to developed campgrounds only and travel permits will be required for remote cottages, the province says.

Those restrictions are in place for several areas of the province, the Wildfire Service says, encompassing all of the province’s east, including the Whiteshell area. The northern Interlake and the Turtle Mountain and Spruce Woods Provincial Park areas are also included under the Level 3 restrictions.

A map showing the current provincial restrictions is available on the province’s website. As of Tuesday afternoon, it had not been updated to include the restrictions coming into effect Wednesday.

Level 2 restrictions are in place for a swath of west-central Manitoba, including the Duck Mountain area.

That means campfires are allowed only between 8 p.m. and 8 a.m. and motorized backcountry travel, including off-road vehicles, is prohibited without a permit.

Another area that includes a wide section of northern Manitoba is under Level 1 restrictions, meaning campfires are allowed only from 8 p.m. to 8 a.m. Backcountry motor vehicle travel is also restricted to those hours unless approved by a travel permit.

No campfires are allowed in any provincial park located outside of fire and travel restriction areas, the province says.

Fireworks and sky lanterns are prohibited in provincial parks at all times under the restrictions, according to the province.

As well, all burning permits are cancelled provincewide and new permits will not be issued until conditions improve, Tuesday’s news release said.

The latest restrictions come as the province sees a continued stretch of dry and hot weather, with temperatures across Manitoba forecast in the mid-20s to 30s for the foreseeable future and little chance of rain in the forecast for most regions.

At least two Manitoba rural municipalities have declared a state of agricultural disaster in the past week following a season of relentless heat, record-breaking temperatures and drought.