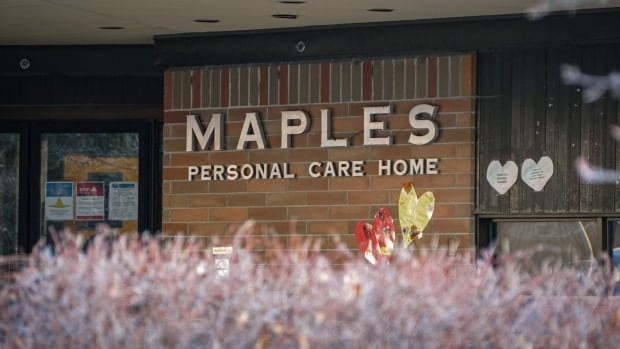 A team will review standards for licensing personal care homes and create a plan for pandemics as part of the implementation of recommendations coming out of the review of the deadly COVID-19 outbreak at Maples Personal Care Home in Winnipeg, the provincial government says.

Within the next three months, the team aims to have a standard pandemic plan for deploying resources to personal care homes.

They will also review and update licensing standards for care homes and the number of unannounced inspections will increase by the end of the year, the government said in a news release.

Longer term, the team will create a workforce plan for the province’s care homes.

The review was commissioned by the provincial government after 56 residents at Maples Long Term Care Home, a 200-bed facility owned by the for-profit company Revera, died in what became the province’s deadliest outbreak at a personal care home.

It made 17 recommendations aimed at improving the operations of personal care homes across the province.

The report was released on Feb. 6, and the provincial government pledged to release its implementation plan within 30 days.

Earlier this week, Eddie Calisto-Tavares, an advocate whose father was among the 56 residents who died at Maples, announced she is forming a volunteer task force to hold the province accountable for the outbreak, and called for a public inquiry into the care home.

In an interview with CBC Manitoba’s afternoon radio show Up to Speed on Friday, she criticized the short-term goals in the plan for not going far enough to improve conditions at personal care homes.

She also said people who she considers responsible for the Maples outbreak still have their jobs, or in some cases have been promoted.

“They have not been held accountable,” she told host Faith Fundal.

An outbreak was declared at the Maples care home on Oct. 20. Staffing shortages became severe as more workers had to self-isolate, leading to a critical situation on Nov. 6, when paramedics were called to the facility to care for a dozen rapidly deteriorating residents.

During the Maples outbreak, although staffing levels had been critical for days, leaders with the Winnipeg Regional Health Authority said they didn’t know the “magnitude of the situation” until Nov. 6.

The implementation team will be chaired by Kathy McPhail, a former chief executive officer of the Southern Health authority, until June.

Other short-term priorities outlined in the report include making sure daily physician rounds are in place as soon as an outbreak at a facility is declared, and ensuring proper staffing for housekeeping during an outbreak.

Improving communication and documentation practices, and identifying clear circumstances that would trigger requests for help, are also key components of the implementation plan.