A new frightfully fun online map has been created to help Winnipeggers engage in a Halloween tradition: checking out some of the yards decked out for the spooky occasion.

The Winnipeg Halloween Map shows the locations of decorated yards throughout the city. Anyone who is dressing up their lawn with things like skeletons, ghosts and tombstones is welcome to list their home on the map.

It was created by Carol Cassell, who has made a similar map for Transcona for the past six years, and wanted to share the idea with others beyond her neighbourhood.

“With COVID-19 this year, I thought that a map of decorated houses that people could tour would bring Winnipeggers a little bit [of] extra joy, which is something I think we all need.”

Anyone who wants to be added to the map can email mappingwinnipeg@gmail.com. Cassell also created a Facebook group called Winnipeg Halloween Events, where people have been posting photos of their decorations. 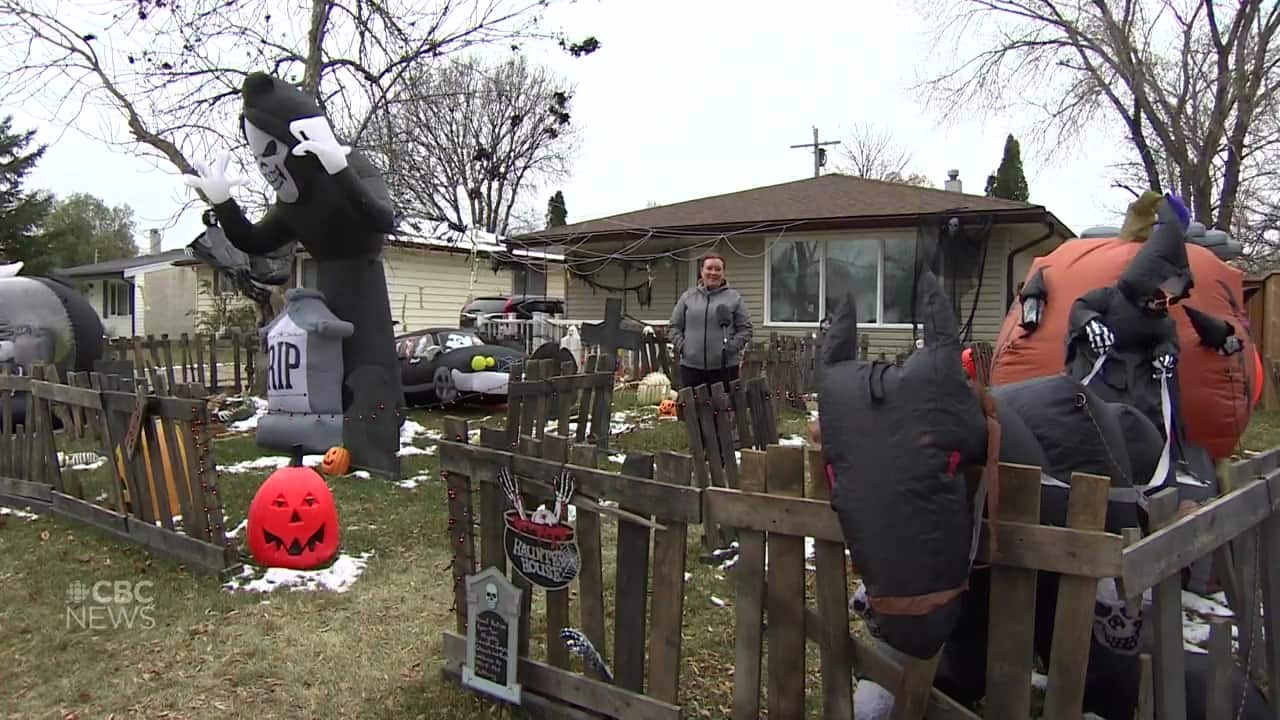 Not only does Carol Cassell have a creepy front yard, but this Transcona resident has created the Winnipeg Halloween Map so you can check out all the decorated spooky spots in the city. 1:55

This year, Cassell’s own house will have a fence around it, which she started making in mid-September, so that children coming for candy can be easily funnelled through without contact.

While the yard is stuffed with decorations, including a ghost car and a spider skeleton, it’s the giant inflatable Grim Reaper that excites kids the most, with its red glowing eyes.

“When you stand in front of it, it looks like it’s going to reach out and grab you,” said Cassell.

A ghoulish graveyard in East Kildonan

Over in East Kildonan, Melissa Lepage and her husband, Ray Lepage, are excited to have their yard on the map. They have been working on their decorations for months, designing and building many themselves.

They made an effort to go all out for this Halloween.

“We know it’s harder to enjoy things right now, and harder for people to go out and do things,” said Ray. “At least it’s something they can see visually and enjoy without having to worry about interacting with anyone.”

WATCH | How the Lepage family is celebrating Halloween: 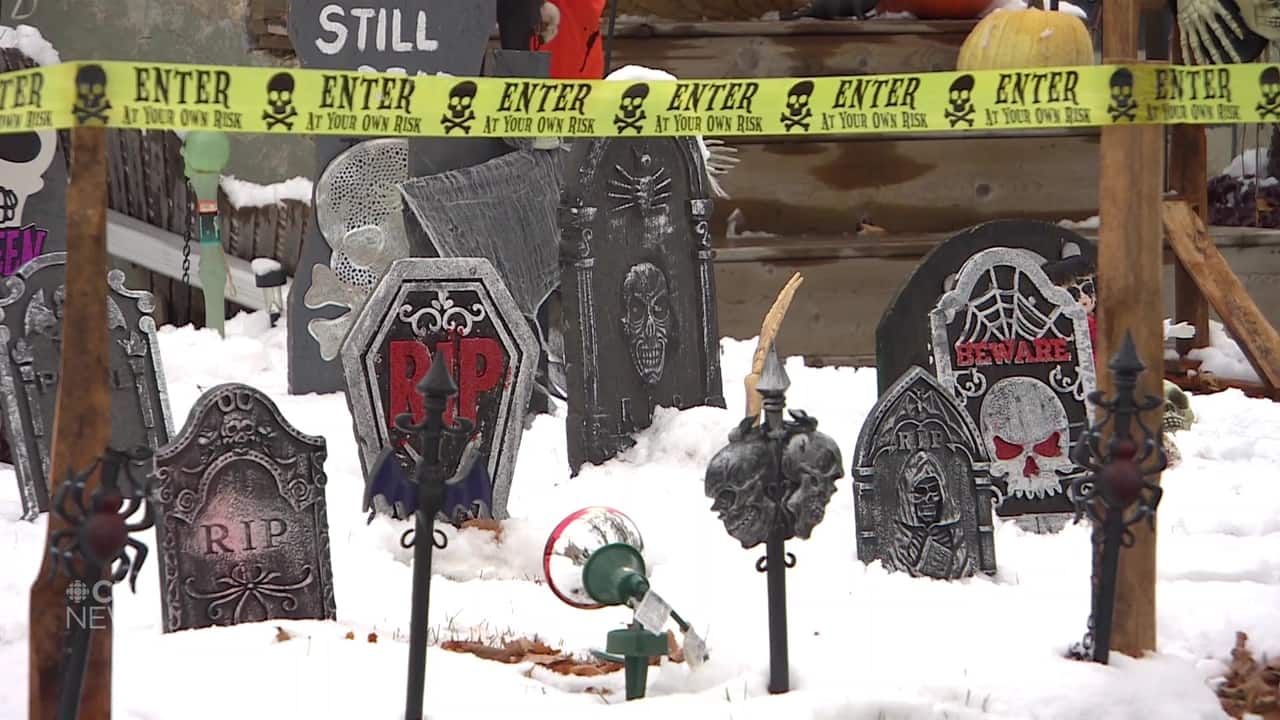 Watch how Melissa and Ray Lepage are getting their place on Winterton Avenue spooky for Halloween. 2:01

Each year they try to do a theme, with a graveyard fitting the bill for 2020. There is even a tombstone that says “COVID-19.”

If you look closely, you’ll also see handmade zombie babies locked away in black handing cages. Overseeing all of this horror is a 12-foot-tall inflatable ghost, affectionately named Martha.

“We usually have somebody jump out and scare people,” said Ray. “Sometimes we will have families come up, and the parents will come to the door and get the candies themself because the kids won’t come anywhere near our front step.”

The candy this year will be handed out via a chute. Melissa plans to label the treat bags so parents will know whose home it came from.

Down the block from the Lepage home, Lynn Paul and her husband are also getting creative with candy distribution.

Paul, who has always loved decorating for Halloween, showed her husband a photo that she found on social media of a candy chute, and he set to work, using some old tubing from the garage.

“The next thing I know is I have this 10-foot tube from the top of my steps to the bottom of my sidewalk.”

Paul also created a walkway for trick-or-treaters. After getting their sweets, kids will head through the marked exit.

On their way out, they’ll pass by large wooden cutouts of a black cat, cauldron, and nearly seven-foot-tall witch. They were all made by hand, with Paul painting them once her husband cut them out.

WATCH | Take a look at this Halloween candy chute: 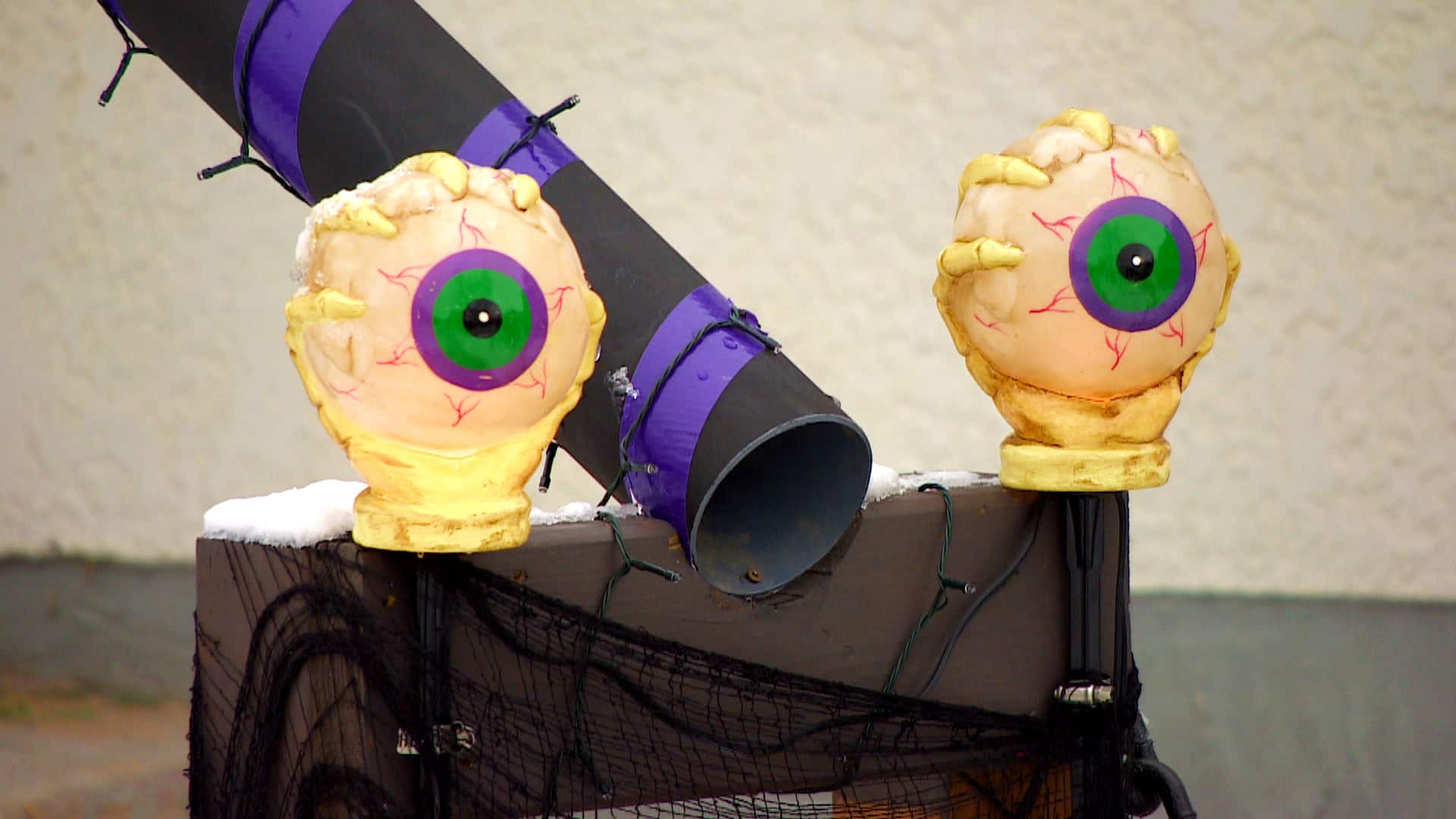 It only took a few weeks for Lynn Paul and her husband to put together this Halloween display, which Paul says people in their neighbourhood — adults and kids — have been watching with anticipation. 2:00

‘”Part of the fun about the whole Halloween thing is you get to build things — you get to use part of your creative process to do whatever you want,” she said.

Come All Hallows’ Eve, you may see Lynn outside dressed up as her alter ego, Arcania the witch, along with her husband as Mr. Bones.

A Charleswood cauldron of candy

Halloween is also a big tradition for Rene Sabo’s family. Her children and husband usually stay home from school and work for the day.

Those 20 to 30 pumpkins are used to decorate the lawn of Sabo’s Charleswood home by day, and taken in each night so they don’t freeze or get eaten by the deer.

The home features a giant structure made of tree branches, and some ghastly children inside.

“We live beside Assiniboine Forest. Every time we go out for a walk in the woods … we bring large sticks out from the ground to build and add to this all the time. In the winter it makes a fantastic snow fort.”

WATCH | Take a tour of the frightfully fun setup at Rene Sabo’s house: 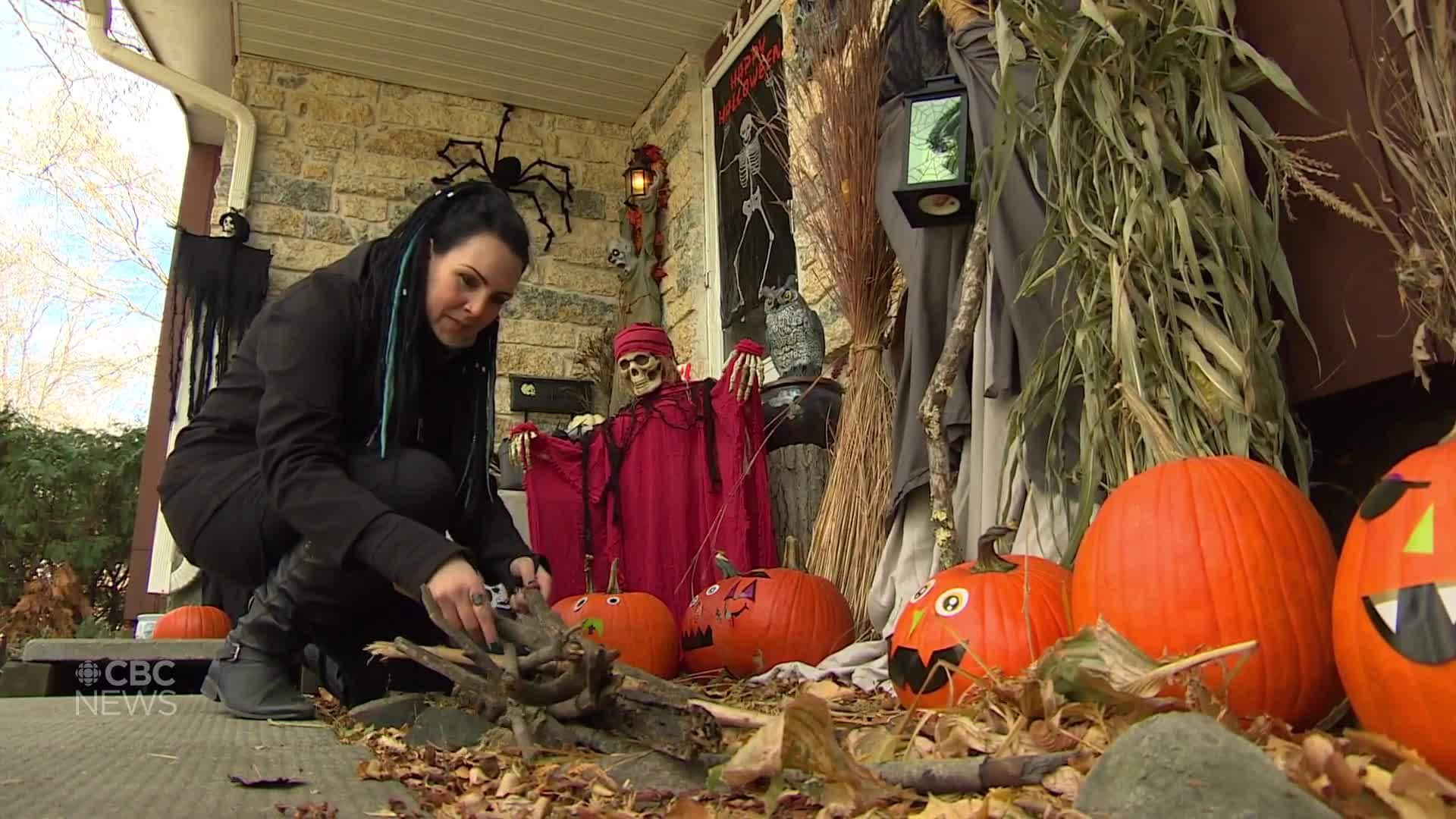 Watch how Winnipegger Rene Sabo is getting her Charleswood home ready for Halloween 2:07

One of the new items Sabo has put out is a seven-foot-tall figure with a buck-skull head.

“He sort of represents Halloween in a spooky horned god kind of way, going back to ancient traditions. He’s got a raven on his shoulder and watches over the pumpkin patch.”

Sabo, who plans to dress up as a witch, will also be giving out candy to anyone who comes by, ladelled out of a cauldron.

Across the city, Shannon Geiger-McLellan’s spooky Harbour View South yard gets a lot of attention.

“Sometimes when we leave the house and we come back, there’s a lineup of cars that we have to wait for to actually pull into our driveway,” she said.

The 12-foot-tall skeleton at the edge of the lawn towers over a basketball net. It’s evident that the bony character is good at the game, because you can see a devil’s head resting in the net.

This creepy yard also features a smoking coffin, a screaming figure in an electric chair, and even an astronaut skeleton, whose glowing green face and ominous moan catch people by surprise on the way to the front door.

If kids have made it up the front door, they get rewarded by a cacophony of sounds. There is an assortment of novelty doorbells to ring that emit scary and silly sounds. If they look down, they can chuckle at the collection of zombie gnomes just outside the door.

WATCH | A decade of celebrating the spooky season: 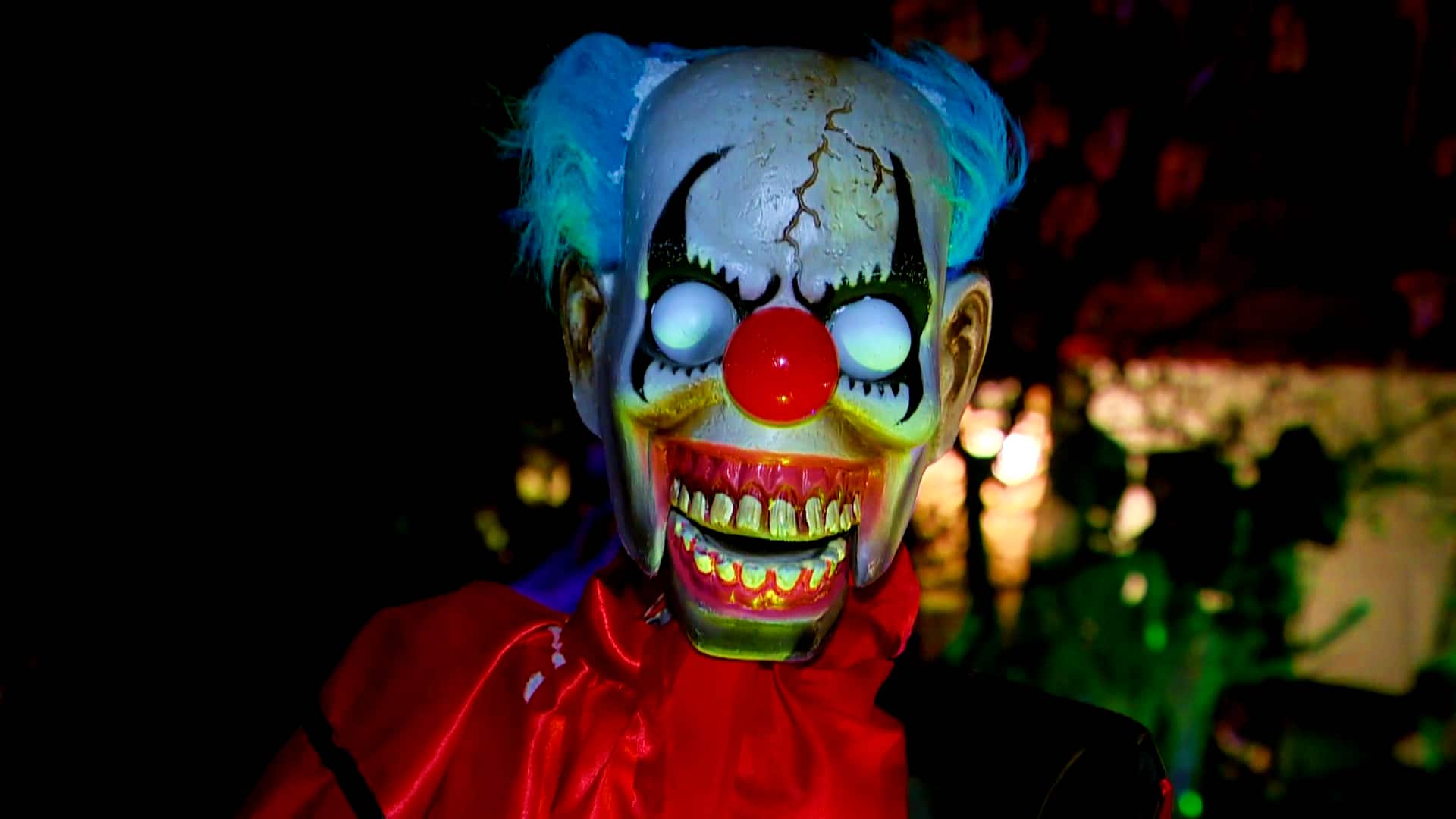 Check out this Harbour View haunt that has been getting into the spirit for the past 10 years. 2:23

Halloween isn’t limited to October for Geiger-McLellan. She loves the holiday so much that she also has some spooky decor inside her house during the off-season. Outside, one decoration stays in place year-round — a zombie that has become like a member of the family, with neighbours coming to see what he’s wearing for each holiday.

“He dresses as Santa Claus in full costume, beard, hat, Santa suit. He also dresses as the Easter Bunny. He will get some love around Valentine’s Day. And he even gets a special summer outfit,” says Geiger-McLellan.

(2694)
(as of January 15, 2021 - More infoProduct prices and availability are accurate as of the date/time indicated and are subject to change. Any price and availability information displayed on [relevant Amazon Site(s), as applicable] at the time of purchase will apply to the purchase of this product.)

(10836)
(as of January 15, 2021 - More infoProduct prices and availability are accurate as of the date/time indicated and are subject to change. Any price and availability information displayed on [relevant Amazon Site(s), as applicable] at the time of purchase will apply to the purchase of this product.)

(1395)
(as of January 15, 2021 - More infoProduct prices and availability are accurate as of the date/time indicated and are subject to change. Any price and availability information displayed on [relevant Amazon Site(s), as applicable] at the time of purchase will apply to the purchase of this product.)

(1377)
(as of January 15, 2021 - More infoProduct prices and availability are accurate as of the date/time indicated and are subject to change. Any price and availability information displayed on [relevant Amazon Site(s), as applicable] at the time of purchase will apply to the purchase of this product.)

(10836)
(as of January 15, 2021 - More infoProduct prices and availability are accurate as of the date/time indicated and are subject to change. Any price and availability information displayed on [relevant Amazon Site(s), as applicable] at the time of purchase will apply to the purchase of this product.)