Cockroaches can be seen scurrying across a counter top in a recent video obtained by CBC News showing an ongoing infestation at Parkview Place Long Term Care Home, despite a December deadline to fix the problem.

The downtown Winnipeg care home, which was the site of one of the province’s deadliest COVID-19 outbreaks, was ordered to resolve the cockroach issue and other deficiencies by December 2020, following a routine Manitoba Health inspection in March.

Video and a photograph, verified by CBC to be taken in recent weeks, show cockroaches are still present on at least two floors of the 12-storey building. CBC has agreed not to identify the source of the video and photo.

“It’s just disgusting,” said Bonnie Ross, whose mother-in-law lived in the building. “It’s shameful that that place is still able to operate when these conditions are long-standing. I complained every time I saw something going on.”

Ross’s 76-year-old mother-in-law, Janet, was one of 29 residents who died of COVID-19 during a months-long outbreak at Parkview Place.

Ross said she saw cockroaches many times over the five years she visited Janet at the home and volunteered there, including Nov. 24, the night Janet died.

When Ross visited her mother-in-law’s fourth-floor room that night to say goodbye and collect her belongings, a cockroach crawled out of a basket on a nightstand.

“I immediately threw my hands up and we decided that that was it, we were going to leave,” Ross said. “I have seen cockroaches crawling in my mother-in-law’s washroom; I have seen one crawling in the dining hall, in the recreation area, pretty much everywhere.” 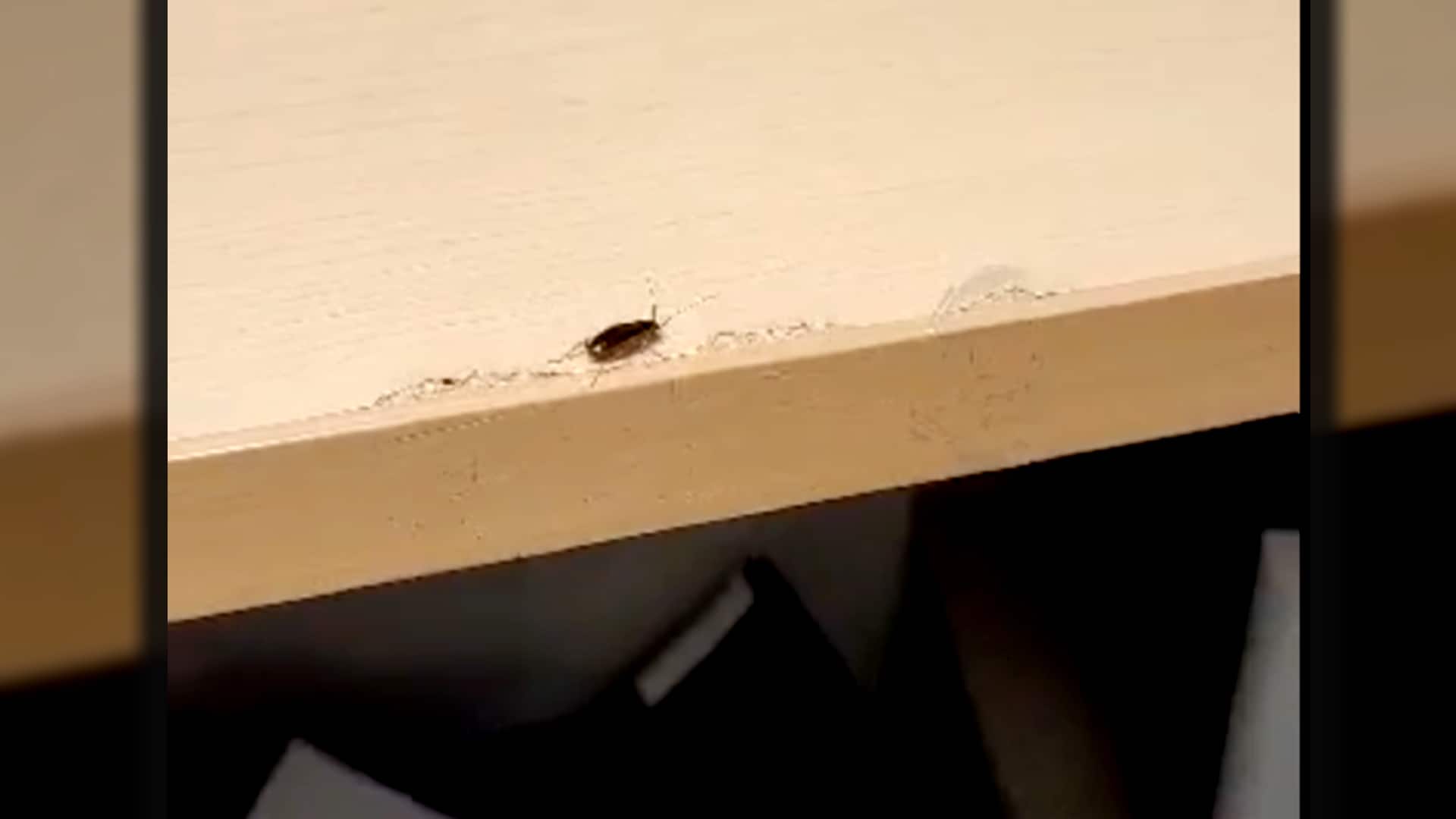 However, nothing prepared Ross for what she found when she arrived home from her last visit.

Ross had taken her mother-in-law’s jewelry, trinkets and a clock radio and left them outside in a bag for a few days before going through it.

“A few days later … I emptied it into a big box so I could see if anything crawled out,” Ross said, adding nothing did.

However, when she opened the battery compartment of the clock radio, she said it was full of dead cockroaches.

She estimates there were easily “about a hundred.”

“When I dumped it out … you could just hear them falling into the garbage receptacle.”

Ross said her mother-in-law, a residential school survivor, “had a pretty tough life, so for her to live like that, at the end of her life was pretty sad.”

“If I had the choice, I would have taken her in myself, but that wasn’t an option, and that’s not an option for everybody.”

Other issues flagged in March report

Parkview Place has exterminators on contract for regular maintenance inspections and to respond to complaints, said a spokesperson for Revera, the for-profit company that runs the home.

Exterminators were in the building in the fall, but efforts were limited due to the COVID-19 outbreak, said Larry Roberts.

They were allowed in as essential service providers, Roberts said, but “as they were not allowed to go into rooms with COVID-positive residents, Parkview Place staff assisted to place traps accordingly.”

Other deficiencies found in the March 2020 inspection, which looked at 12 set standards, have not been remedied to date either.

The home passed every standard in the March report, but reviewers noted infection control issues under the safety and security standards section.

Another report, previously disclosed to CBC News by Revera, found similar problems uncovered in a surprise inspection of Parkview Place performed by provincial licensing officials in 2017.

Revera hired a contractor to complete the outstanding repairs, but the work was paused because contractors couldn’t come into the building during the COVID-19 outbreak, which began in mid-September 2020, Roberts said.

The outbreak was declared over on Jan. 12.

Revera has been working with the Winnipeg Regional Health Authority “on an ongoing basis to respond to the outbreak and to address any issues that were raised during the inspection,” Roberts said in an email.

“We look forward to the contractors returning as soon as possible to Parkview Place to complete these minor repairs.”

No deadline to fix the problem: WRHA

Meanwhile, the Winnipeg Regional Health Authority, which provides funding and oversight to the home, confirmed it was made aware of cockroaches in Parkview Place in March 2020, and an infestation was flagged again in October during a surprise inspection of the home.

“The review team noted the cockroach issue in their report, so yes, it is fair to say it’s an issue of concern for WRHA that we would like to see resolved,” a health authority spokesperson said in an email.

The spokesperson said the WRHA recommended Parkview management take immediate action “to engage with their existing pest control provider to increase pest control treatments, and to identify and address potential causes of the problem.”

There is no deadline to resolve the problem, the spokesperson said.

“It is our understanding that it remains an ongoing issue at the facility but that eradication and control efforts also continue.”

“Cockroaches in a long-term care home is unconscionable. Cockroach infestations for what is now the better part of a year is almost unfathomable,” said Laura Tamblyn Watts, a lawyer and CEO of the national seniors’ advocacy group CanAge.

“If you are housing and providing care for our most fragile, vulnerable citizens and you have a persistent cockroach infestation, you have a failure of massive proportions to provide adequate and humane care.”

The nine-month timeline to resolve deficiencies was already “too generous,” she said, and the onus lies with the Manitoba government.

Regardless of whether the home is private, for-profit or non-profit, the province is responsible for licensing, funding and inspecting all personal care homes.

“The good thing is that the recipe for personal care homes and seniors’ care improvements is very clear. Please put seniors’ care at the top of your list. If not, nothing will get better.”

In an email, a spokesperson for Manitoba Health said the cockroach issue is related to “larger infrastructure problems” that Parkview hasn’t been able to address because it can’t get contractors in during COVID-19 restrictions.

“Under current legislation, further enforcement can be taken using a Notice to Abate by public health inspectors, with the main goal to eradicate the pests. Failure to comply may result in the issuance of a fine,” the statement read.

A spokersperson for Manitoba’s health minister said “fines are not anticipated at this time” and the timeline to complete work is provided to the facility by public health inspectors and “it is expected that multiple visits will be required to rectify the situation.”

With respect to increasing funding, the spokesperson added, “our government has invested over $280 million in personal care homes and we will continue to make more investments going forward.”

Bonnie Ross said she would like to see the province stop panelling any more seniors to live at Parkview Place until repairs and the cockroach infestation are resolved.

“Something has to be done,” she said. “I’m just glad my mother-in-law is not in there anymore.”

(13254)
(as of March 4, 2021 - More infoProduct prices and availability are accurate as of the date/time indicated and are subject to change. Any price and availability information displayed on [relevant Amazon Site(s), as applicable] at the time of purchase will apply to the purchase of this product.)

(102775)
(as of March 4, 2021 - More infoProduct prices and availability are accurate as of the date/time indicated and are subject to change. Any price and availability information displayed on [relevant Amazon Site(s), as applicable] at the time of purchase will apply to the purchase of this product.)

(1442)
(as of March 4, 2021 - More infoProduct prices and availability are accurate as of the date/time indicated and are subject to change. Any price and availability information displayed on [relevant Amazon Site(s), as applicable] at the time of purchase will apply to the purchase of this product.)

Beyond Order: 12 More Rules for Life

(26)
(as of March 4, 2021 - More infoProduct prices and availability are accurate as of the date/time indicated and are subject to change. Any price and availability information displayed on [relevant Amazon Site(s), as applicable] at the time of purchase will apply to the purchase of this product.)

(2)
(as of March 4, 2021 - More infoProduct prices and availability are accurate as of the date/time indicated and are subject to change. Any price and availability information displayed on [relevant Amazon Site(s), as applicable] at the time of purchase will apply to the purchase of this product.)