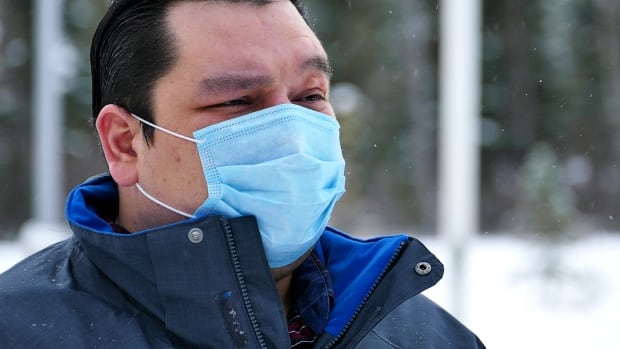 The chief of a remote northern Manitoba First Nation is calling for help after his sister died by suicide and a young child was left in critical condition following a suicide attempt.

“We are currently facing a suicide crisis in our community. We are calling for mental wellness supports for our community members at this time,” he said in a virtual news conference.

“On May 9, we lost a mother of four to suicide and just last night we had a serious attempt by a seven-year-old child who is currently at Children’s Hospital in Winnipeg and is currently unresponsive.”

The mother of four was Redhead’s only sister. She was 32.

She wasn’t related to the seven-year old.

Redhead says there’s been an increase in suicide attempts since the start of the COVID-19 pandemic.

Mobile crisis teams from Manitoba Keewatinowi Okimakanak and the Keewatin Tribal Council are arriving Tuesday in the fly-in community, about 745 kilometres northeast of Winnipeg.

“When we see one [suicide] … we often see a domino affect, and that’s what we’re worried about,” he said.

Health Canada directed CBC News to Indigenous Services Canada which has not yet responded.

“It has really shown how deficient we are in mental health and emotional wellness,” he said. “They have nowhere and no one to reach out to.”

First Nations already grappling with poverty-related issues, and especially those that are remote, continue to battle the crisis of suicide, Settee says, but it’s gotten worse during the pandemic because of isolation and loss.

In 2002, Shamattawa’s chief at the time declared a state of emergency after three people took their own lives within nine days.

Then in 2016, four young people died by suicide within six weeks.

Three years later when Redhead became chief, a 12-year old died by suicide. There have been many more attempts over the years, he says.

Although the community has mental health programs in place with government agencies, he says Shamattawa needs to have more control over how programming is delivered.

“We can’t be creative and do our own thing because it doesn’t meet the program’s mandate,” he said.

“We’re really restricted in being able to deliver health services to our members.”

If you’re experiencing suicidal thoughts or having a mental health crisis, help is out there. Contact the Manitoba Suicide Prevention and Support Line toll free at 1-877-435-7170 (1-877-HELP170) or Kids Help Phone at 1-800-668-6868. You can also text CONNECT to 686868 and get immediate support from a crisis responder through the Crisis Text Line, powered by Kids Help Phone.