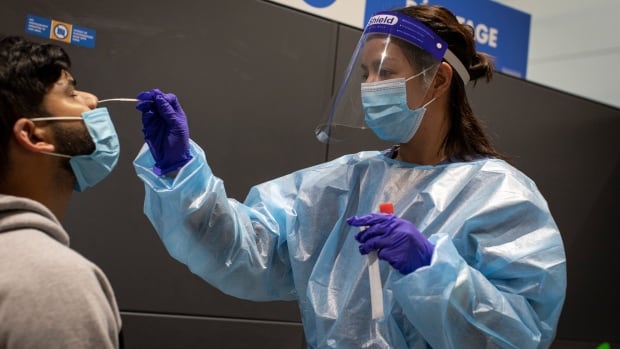 There are 80 new COVID-19 cases in Manitoba on Sunday and four more people have died from the illness, the province says in a news release.

That’s the lowest one-day case increase Manitoba has seen since Oct. 19, when the same number of cases was reported.

A little more than one-third of Sunday’s new cases are in the Winnipeg health region (31), while 28 are in the Northern Health Region, the release says.

The deaths announced Sunday, all from the Winnipeg health region, include three men in their 70s, 90s and 100s, the release says. A woman in her 80s linked to the city’s Poseidon Care Centre has also died.

The five-day test positivity rate has not changed since Saturday, standing at 6.1 per cent in the province and 3.8 per cent in Winnipeg, the release says.

There are now 263 COVID-19 patients in hospital in Manitoba, the release says, up from 259 on Saturday. Thirty-eight of those people are in intensive care, down from 40.

Two outbreaks are now over, the release says: one at Le Chalet de La Broquerie, an assisted living facility, and another at Deer Lodge Centre, Lodge 2 West in Winnipeg.

Meanwhile, Manitoba child-care providers will be eligible for rapid testing appointments at the Fast Pass site in Winnipeg starting Monday, the release says.

Information about booking an appointment at the Nairn Avenue site is available on the province’s website.

The latest deaths bring Manitoba’s total to 846. There have now been 30,237 COVID-19 cases detected in the province, including 26,135 people deemed recovered.

There are 3,256 cases still considered active, though health officials have said that number is inflated by a data entry backlog.

There were 1,434 COVID-19 tests done in Manitoba on Saturday, which brings the total number of swabs completed in the province since last February to 489,506, the release says.