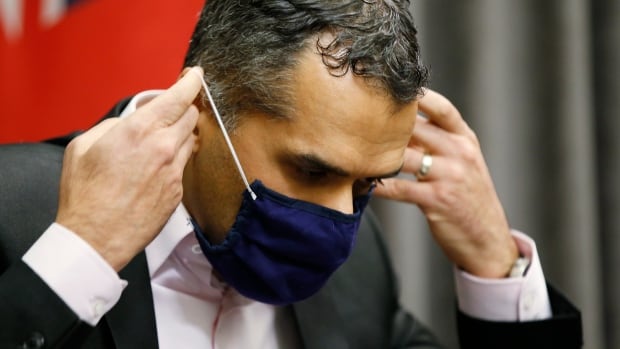 Manitoba’s deputy chief provincial public health officer will provide a COVID-19 update on Friday, a day after the teachers’ union called for all public schools to move to remote learning as cases rise.

Dr. Jazz Atwal will hold a news conference at 12:30 p.m. CBC Manitoba will live stream it here and on Facebook, Twitter and CBC Gem.

The Manitoba Teachers’ Society on Thursday said it wants schools to be put under the critical or red level of the province’s pandemic response system and be shifted to online learning starting May 4 until the third COVID wave slows.

James Bedford, president of the union, said the province has dragged its feet on prioritizing teachers for vaccines and now, as cases surge, it’s too risky to keep schools open.

But Premier Brian Pallister on Thursday said the best place for kids is in schools, where they have the structure of a classroom and direct contact with an educator.

Pallister announced that Manitoba teachers and other school employees will be able to go to North Dakota to get vaccinated just across the U.S. border, in an arrangement similar to the one set up for cross-border truckers from Manitoba.

The plan was quickly panned by Bedford, who said it is only realistic for teachers who live within reasonable driving distance of the border, have a vehicle and someone who can watch their own kids if they want to make the trip.

And even if all teachers were vaccinated today, it would be mid- to late May before the shots became effective, he said.

Asked why the onus will be on teachers and education workers to drive across the border on their own time, Pallister said he thinks most teachers will see it not as a burden but as an opportunity.