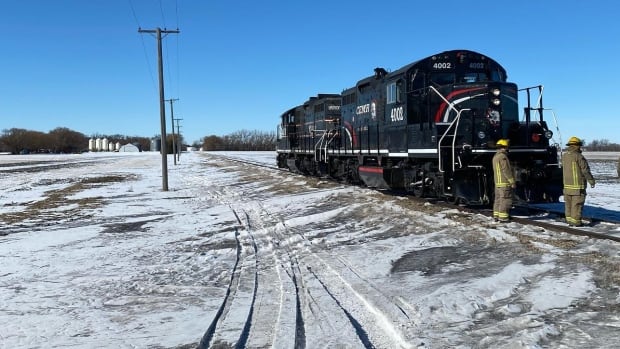 The driver of an SUV was taken to hospital, but not seriously injured, after colliding with a train in southern Manitoba Sunday morning, authorities say.

The crash happened around 11:10 a.m. on the train tracks on Highway 3 just outside Carman, a town about 75 kilometres southwest of Winnipeg.

Manitoba RCMP and the Carman Dufferin Fire Department were both called to the scene of the crash.

The driver was the only person in the vehicle, RCMP spokesperson Tara Seel said in an email.

The vehicle was driving north when it collided with the train, which was travelling west, the fire department said on Facebook.

The driver was already out of the vehicle by the time firefighters got to the scene. They were taken to the hospital by ambulance, the fire department said.

None of the train operators were hurt, the fire department said.

A forensic collision reconstructionist was at the scene Sunday afternoon, Seel said, and Mounties expect to provide more information on Monday.