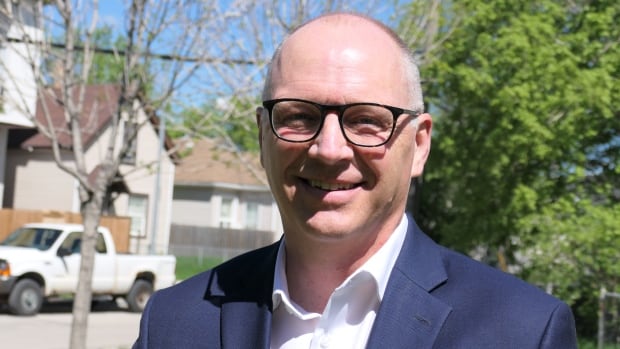 The St. James councillor made the announcement Wednesday morning in front of the Magnus Eliason Recreation Centre, on Langside Street in Winnipeg’s West End.

He committed to extending the funding for that site, and one other core-area safe space, until 2026, and increasing the amount of funding.

He also said as mayor, he’d ensure funding for a third safe space in a North End neighbourhood, but wouldn’t say specifically where, how much he hopes to increase the funding by, or how he’d find the extra room in the city’s budget.

The WE-24 program, which operates a West End safe space out of Magnus Eliason Recreation Centre, wants to offer services 24 hours a day. Right now, it only has the resources to run overnight.

The two programs rely partly on city funding, but that’s set to run out next year. Gillingham said he’d extend it for another three years if elected.

“WE-24 and Velma’s House are right there on the front lines working with individuals providing safe shelter,” Gillingham said in an interview.

He said the city’s efforts can only go so far when it comes to addictions, crisis and housing resources, but he plans on finding new ways to make a difference.

“We can’t expect anything to change for the long term if we’re simply moving homeless people and unsheltered people out of one park or underpass or bus shelter, only to force them into another public space,” he said.

Gillingham, who is currently the city councillor for St. James, is one of nine people who have now registered mayoral campaigns.

The civic election is Oct. 26.