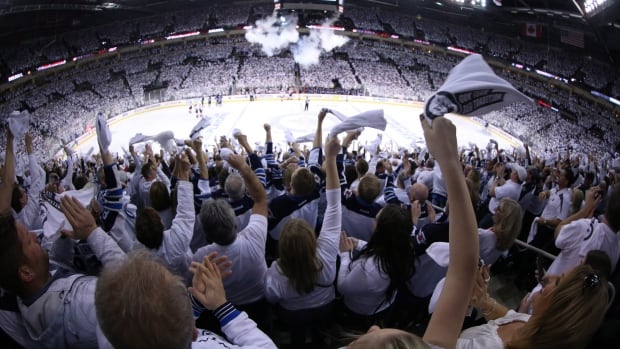 Manitoba health-care workers are divided when it comes to this week’s offer to watch the Winnipeg Jets playoff game at Bell MTS Place in person.

Dr. Heather Smith, a intensive care physician in Winnipeg and Jets fan, says she chose not to enter the lottery the team announced Tuesday, which will give 500 fully vaccinated health-care workers free tickets to attend Game 1 and 2 of the second-round playoff series.

Smith said while it is safe and a nice gesture, she thinks it sends a mixed message.

“I think that those who go should enjoy it. They shouldn’t feel guilty for going,” she said.

“But I also feel like we should have consistent messaging to the public and the consistency in the message just isn’t there when you allow small groups to do one thing and other small groups not to do another.”

On Tuesday, Premier Brian Pallister said allowing fans to attend is an optimistic sign “that we can start to get our lives back here in Manitoba.”

Smith said the premier’s message contradicts the reality inside intensive care units, which still have yet to peak with critical care patients.

As of Wednesday, there are 294 COVID-19 patients in hospital, including 69 patients in Manitoba intensive care units. Another 40 Manitoba patients are in critical care in hospitals in Ontario and Saskatchewan.

“The message of optimism and returning back to normal isn’t what I’d like to hear from our leadership right now,” Smith said, adding this is not the time for people to let their guards down.

On Wednesday, the head of the Manitoba Nurses Union issued a statement saying its members are divided about attending the game.

“Nurses are certainly torn between supporting the home team, and leading by example with respect to restrictions on public gatherings,” president Darlene Jackson said in the statement. “We’ll leave it up to the good judgment of nurses in terms of attendance for those who have been selected, and fully vaccinated.”

Jackson added many nurses will be wearing white in support of the Jets, but they will be supporting the team from the ICUs and ERs in various health-care facilities.

However, Dr. Don Klassen, a family physician in Winkler, said having health-care workers in the stands Wednesday night will show people what the future could hold and hopes it helps encourage people to get vaccinated.

He has added his name to the draw.

“I’d love to go,” he said. “I think it is a bit of an encouragement to people that once you’re fully vaccinated, we can cautiously start reopening things.”

Dr. Joss Reimer, the medical lead of Manitoba’s vaccination task force, said this is small example of some of the activities Manitobans will be able to return to doing as more are vaccinated. Public health was engaged in planning to ensure the return of fans was carried out safely, she said.

“We want to thank the health-care workers who have been doing this for a year and a half,” she said at a news conference Wednesday. “While we’re telling most Manitobans to stay home, that’s not the message we give to the health-care workers. We’re asking them to come in and to put themselves in front of this virus every single day.”

More than 6,000 entries from fully vaccinated health-care workers were received for the draw, according to True North Sports and Entertainment.

“As Manitobans make their appointments to get vaccinated, we hope that the sight of fans back in the stands will offer some encouragement of what a return to a more normal life will look like,” said John Olfert, True North’s president and chief operating officer, in a statement.

To be eligible for the draw and to attend, health-care workers must have a current health system photo ID, be fully vaccinated for COVID-19 and be able to show proof of vaccination status prior to entering Bell MTS Place.

Masks must be worn at all times in the arena and concessions will not be open.

Information about tickets for Game 2, on Friday, will be announced in the coming days.