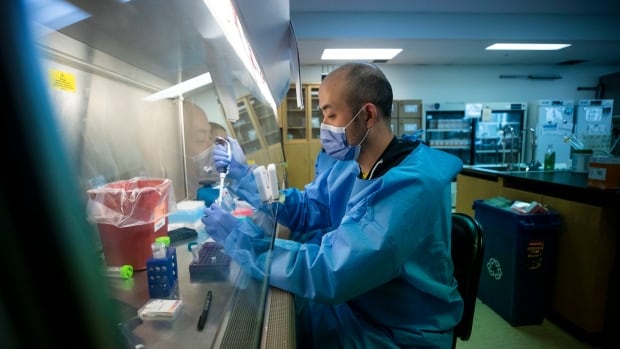 Manitoba has 46 new COVID-19 cases and one more person has died from the illness, health officials announced Friday.

The person who died was a woman in her 60s in the Southern Health region, the province said in a news release.

Manitoba’s five-day test-positivity rate is 2.3 per cent, up from 2.1 on Thursday. The rate in Winnipeg also rose to 1.4 per cent from 1.1 per cent on Thursday.

There are currently 542 active cases in the province.

A total of 57,593 COVID-19 cases have been confirmed in Manitoba, and 1,178 people have died since the beginning of the pandemic.

Hospitalizations continued to fall on Friday. Currently, 93 people in Manitoba are hospitalized due to COVID-19 — 25 of them in intensive care.

That’s down from 102 people in hospital and 29 patients in intensive care on Thursday.

An outbreak at Marie Thorarinson Estates Assisted Living Facility in Arborg has been declared over, the province’s news release said.

Genetic testing has confirmed 23 new cases of COVID-19 linked to coronavirus variants of concern in Manitoba, according to the province’s online dashboard. There are 326 active cases linked to the more contagious variants, up from 318 on Thursday, and 181 confirmed deaths linked to variants.

On Friday, the province announced it is sending 5,500 doses of the AstraZeneca-Oxford vaccine back to the federal government, to be donated to countries in need of vaccines. These doses were set to expire at the end of August, but there are still unexpired doses available at some medical clinics and pharmacists in Manitoba.

As of Friday, 79.5 per cent of eligible Manitobans have received one dose of a vaccine, and 69.3 per cent have had two.

Aug. 2 is the deadline for people to get their first shot to be eligible for the first vaccine lottery.