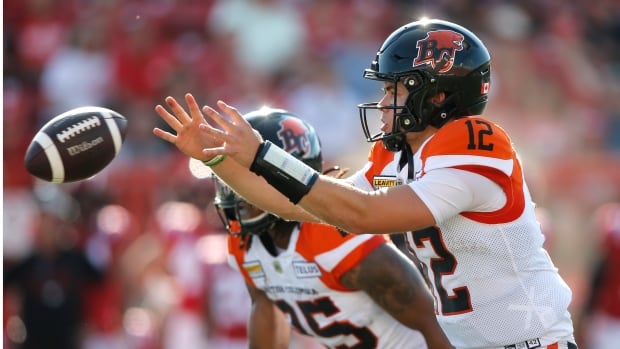 Sean Whyte’s 25-yard field goal with two seconds left in the fourth quarter capped a B.C. Lions’ comeback in a 41-40 win over the host Calgary Stampeders on Saturday.

Lions quarterback Nathan Rourke recovered from two early interceptions which the Stampeders converted into touchdowns to score a pair of rushing touchdowns, and throw for 488 yards and a pair of touchdowns.

Peyton Logan’s 99-yard kick return to score midway through the fourth quarter gave the Stampeders a nine-point lead, but the Lions chewed up the deficit.

University of Calgary alumnus Jalen Philpot scored his first CFL touchdown, as did defensive lineman Folarin Orimolade on an interception return for Calgary.

Shawn Bane had a touchdown catch and Rene Paredes kicked field goals from 28, 53, 32 and 51 yards in front of an announced 22,229 at McMahon Stadium.

The Lions (7-1) and Stampeders (5-3) rank second and third respectively in the CFL’s West Division behind the Winnipeg Blue Bombers (9-1).

Calgary and B.C. conclude their season series with a home-and-home Sept. 17 in Calgary and Sept. 24 in Vancouver.

He needed just six yards to vault over Henry Burris (32,191) and reach that milestone in his 10th season and 116th game with Calgary. Burris played 118 games for the Stampeders.

After two straight games without a touchdown pass, Mitchell threw two Saturday. The Stampeders quarterback completed 18 or 32 pass attempts for 206 yards and was interception-free.

Logan’s kickoff return for a 99-yard major gave the Stampeders a 40-31 lead with just over six minutes to play.

The Lions would not go quietly, however, with Burnham’s 33-yard catch under double coverage taking B.C. to Calgary’s 10-yard line with just under three minutes to play.

Rourke collected his seventh rushing touchdown this season on a one-yard carry for B.C. to trail by just two points.

The Lions faced a long field for a winning field goal starting from their own six-yard line with 1:20 to play, but Cameron Judge’s roughing-the-passer penalty shortened it for the visitors. Rourke engineered a nine-play, 86-yard drive to get Whyte in field-goal range.

The Lions trailed by 12 points when B.C. linebacker Ben Hladik recovered Dedrick Mills’ fumble on Calgary’s 34-yard line in the final minute of the third quarter.

Rourke overthrew Lucky Whitehead in the end zone leaving Whyte a 23-yard field goal to make. But Rourke’s 54-yard touchdown pass to Burnham behind coverage with seven minutes left in the game pulled the Lions within two points of the lead.

Calgary parlayed a pair of Rourke interceptions into a 20-3 lead by the first minute of the second quarter, when Orimolade ran his first career pick back 28 yards to score.

Rourke rallied with a pair of scoring drives — sandwiched around a Paredes 32-yard field — but the Stampeders would score again before the half.

B.C.’s David Menard’s roughing-the-passer penalty moved Calgary to the Lions’ 24-yard line, where Mitchell promptly threw to Bane dashing into the end zone for a 30-18 lead at halftime.

Paredes was wide from 51 yards in the final minute of the half, but split the uprights from the same distance early in the third quarter for Calgary’s 33-18 lead. Whyte was good from 38 yards midway through the quarter to cut the deficit.

Rourke scored his first rushing touchdown of the night with a one-yard plunge in the second quarter.

After Orimolade’s pick-six, Rourke quickly marched the Lions downfield to cap a 78-yard drive with a 30-yard throw to Rhymes in the end zone.

Paredes’ 53-yard field goal, which matched his season’s longest, gave the hosts a 13-3 lead with four minutes remaining in the opening quarter.

After Nick Statz picked off Rourke on B.C.’s second drive of the game, Mitchell’s second pass was a 19-yard throw to Philpot in the end zone to score.

Both Philpot and Stampeders receiver Richie Sindani left the game before halftime and didn’t return.

The visitors turned a special-teams turnover into a field goal to start the game when Logan fumbled B.C.’s first punt. Garry Peters recovered at the 35-yard line, but the Lions ended up settling for Whyte’s 19-yard boot for three points.

The Stampeders countered with three points on the subsequent drive. Philpot returned the kickoff 76 yards and appeared headed for the end zone when he stumbled on B.C.’s 29-yard line. Paredes capped the drive with a 28-yard field goal.

Roughriders take down Elks in Edmonton

Quarterback Cody Fajardo ran a pair of touchdowns in himself and passed for another as the Saskatchewan Roughriders emerged with a 34-23 victory over the Edmonton Elks on Saturday.

The Elks (2-7) have now lost 12 straight home games at Commonwealth Stadium, a shameful stretch extending back to Oct. 12, 2019.

After Saskatchewan recorded a punt single on its opening drive, Edmonton came roaring back with quarterback Taylor Cornelius opting to run himself on a broken play for a 10-yard touchdown.

Fajardo responded in kind late in the opening quarter with a one-yard plunge to put the Riders back in front.

Edmonton looked poised to regain the lead, but Cornelius fumbled the ball away on the Saskatchewan five-yard line, with Rider Charleston Hughes recovering the ball.

The teams then traded field goals, with Elk Sergio Castillo making one from 38 yards and Lauther connecting from 46.

The Elks surged back ahead when Cornelius took another ball into the end zone himself, scrambling in from 26 yards with 31 seconds left in the opening half.

However, Saskatchewan would regain the lead before the halftime break off the ensuing kickoff as Mario Alford blazed 98 yards for the touchdown to give his team a 21-17 lead. The halftime break was extended due to nearby lightning strikes.

Edmonton conceded another punt single, the only point in the third.

Castillo started the fourth quarter with a 44-yard field goal, and got another 46-yarder shortly after on the heels of an interception by Nafees Lyon to give them a one point advantage.

The Riders regained the lead with four minutes left as Fajardo found Duke Williams in the end zone with a 24-yard TD pass. The two-point convert failed.

Edmonton attempted to trade blows, but Cornelius was picked off by Rolan Milligan, leading to a six-yard QB keeper for a touchdown by Fajardo.

Both teams return to action next Friday as the Elks travel to Ottawa and the Roughriders host the B.C. Lions.

(104542)
$30.15 (as of September 28, 2022 02:39 GMT -05:00 - More infoProduct prices and availability are accurate as of the date/time indicated and are subject to change. Any price and availability information displayed on [relevant Amazon Site(s), as applicable] at the time of purchase will apply to the purchase of this product.)

(17770)
$21.97 (as of September 28, 2022 02:39 GMT -05:00 - More infoProduct prices and availability are accurate as of the date/time indicated and are subject to change. Any price and availability information displayed on [relevant Amazon Site(s), as applicable] at the time of purchase will apply to the purchase of this product.)

(102)
$27.99 (as of September 28, 2022 02:39 GMT -05:00 - More infoProduct prices and availability are accurate as of the date/time indicated and are subject to change. Any price and availability information displayed on [relevant Amazon Site(s), as applicable] at the time of purchase will apply to the purchase of this product.)

(1436)
$29.97 (as of September 28, 2022 02:39 GMT -05:00 - More infoProduct prices and availability are accurate as of the date/time indicated and are subject to change. Any price and availability information displayed on [relevant Amazon Site(s), as applicable] at the time of purchase will apply to the purchase of this product.)

(74096)
$24.75 (as of September 28, 2022 02:39 GMT -05:00 - More infoProduct prices and availability are accurate as of the date/time indicated and are subject to change. Any price and availability information displayed on [relevant Amazon Site(s), as applicable] at the time of purchase will apply to the purchase of this product.)