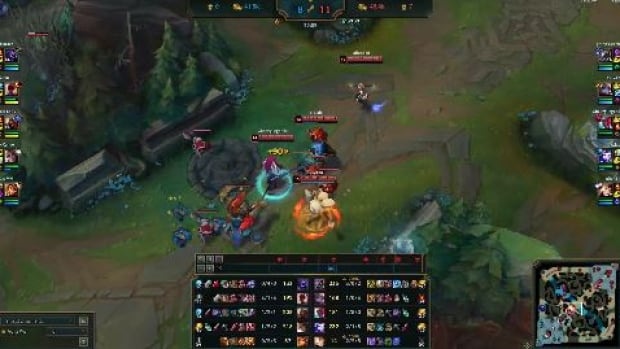 It’s a weekend where esport legends will be made.

Players in one of the few Manitoba high school sports still happening during the pandemic are facing off this weekend in the League of Legends video game esport playoffs, which started Saturday afternoon.

Across the country, esports — a form of competition using online video gaming — have been taking off as a new way for rival schools to go head-to-head.

Physical education teacher Cyril Indome, who supervises the Windsor Park team, said the activity is just as intense as any other sport he’s coached.

“When I hear the way they communicate, the way they work together … the strategy, the tactics of it, it’s a really, really impressive game,” he stold CBC’s Weekend Morning Show host Marjorie Dowhos on Saturday.

He said he doesn’t personally play League of Legends — a team-based arena battle game — so needed to learn a lot after students asked him to supervise their team. But now that they’re in the playoffs, a lot of the coaching is similar to other sports.

“The regular season is done and that record does not matter at all when it comes to the playoffs. So everybody’s got a clean slate when we’re coming in,” Indome said.

Austin Tomlinson, a Grade 12 student on Windsor Park’s esports team, said he got involved when some friends asked him if he wanted to join their team — and he’s put in a lot of work since then.

“I have definitely put in a lot more hours than I should have…. It’s probably 60-plus hours [I’ve spent] on it right now,” Tomlinson said.

“It feels just like any other Windsor Park sport. It’s very open and it’s very welcoming.”

Tomlinson said Saturday morning he was feeling a little nervous about his team facing off against Kildonan-East in the afternoon A-side final, since they’ve played that school’s team before and never won.

“We haven’t beat them yet, but we’re going to change that this time.”

This weekend also saw teams from J. H. Bruns and Glenlawn face off against each other in the B-side final earlier in the afternoon.

Windsor Park coach Indome said because of school cohorts during the pandemic, he hasn’t actually seen some of his team’s players for months.

And while it’s been nice to have a way to still keep in touch with them virtually, it will be even better once they’re able to play in person again like they did before the pandemic.

“That’s been challenging … for all the staff and students, just the way everybody’s been sectioned off and cohorted to just kind of keep everybody safe,” he said.

“I do look forward to when we can get everybody back in one space, like a library or a gym.”