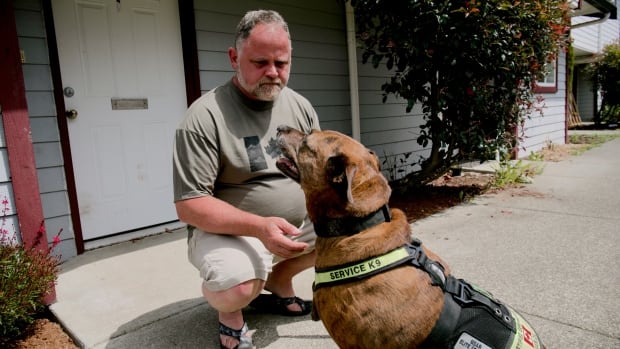 A provincial human rights adjudicator has ordered the former owners of a hotel in Riding Mountain National Park to pay a man who has a service dog to help with his post-traumatic stress disorder $6,000 in damages.

The Manitoba Human Rights Commission panel’s decision, which was published on Nov. 23, found William Webb was discriminated against when the hotel put conditions on his stay with his service dog.

Webb, who currently lives in B.C., served in the Afghanistan war and relies on a service dog named Spencer to help with his PTSD.

The complaint, originally filed in 2014, arose after Webb and his family booked a hotel in Wasagaming, Man. A conflict arose between Webb’s family and the people who then owned the Manigaming Resort over the service dog, the decision says.

Sandra and Lennard Carlson, the owners at the time, told the adjudication panel they initially didn’t want the family to stay because of the animal. However, after a discussion with the Webbs, they said they would allow them to stay if the service dog used the rear door to the unit, wasn’t allowed in the courtyard of the resort and wasn’t left unaccompanied.

Webb said that was unacceptable because it would have deprived the family of the full use and enjoyment of the resort, which included a courtyard and a pool. The family cut the trip short because there were no other suitable accommodations on that summer weekend.

The interaction caused Webb significant mental and emotional distress, the panel was told.

“Spencer was a service animal, and not a ‘pet,’ which is a critical distinction. The Carlsons had an obligation to weigh their concerns with pets generally with Mr. Webb’s specific disability-related needs and his request to be treated no better or worse than any other guest staying at the resort,” wrote Karine Pelletier, the lead adjudicator.

“The Carlsons also had an obligation to consider the impact of their policy … to ensure that services are accessible to individuals with protected characteristics under the [Human Rights] Code.”

Webb asked for $9,000 in damages, saying he was devastated, his vacation was ruined and he suffered a significant setback in treatment as a result of what happened.

Although Pelletier wrote that she believes Webb suffered significant stress because of the incident in Wasagaming, she doesn’t believe this incident alone caused his decline.

“However, it is reasonable for me to conclude … that the interaction and denial of service exacerbated his pre-existing medical condition,” Pelletier wrote.

The adjudicator added that although the Carlsons said they may have acted differently knowing what they know now about service animals, they also defended their actions, denying they did anything that would constitute a breach of the Human Rights Code.

CBC News has not been able to reach the couple for a response.

“The denial of access to public services continues to be a nationwide problem and barriers continue to exist for those who require the use of a service animal,” Webb said in a news release issued by the Human Rights Commission.

“I hope that the Manitoba Human Rights Commission and others continue to educate the hospitality industry on their obligations to respect the rights of service animal users.”