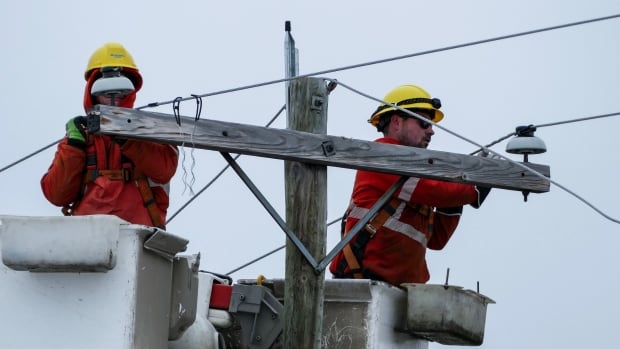 The union representing Manitoba Hydro’s field employees says its members could strike in 48 hours if they can’t reach a fair agreement with the Crown corporation.

The International Brotherhood of Electrical Workers Local 2034 — which represents Hydro’s front-line employees such as workers at generating stations and on transmission lines — provided the utility with a 48-hour strike notification on Sunday.

The union members voted in favour of a strike mandate, according to an internal union memo on Wednesday.

The mandate gives the union permission to strike, but the union assured members it would “exhaust every possible means of attaining a fair agreement and will do its utmost to avoid invoking a strike,” the memo said.

The almost 2,300 workers represented by IBEW Local 2034 have worked without a contract with Manitoba Hydro since 2018.

CBC News has reached out to both the union and Manitoba Hydro for more information.

The Opposition New Democrats have accused the government of trying to interfere in their negotiations.

In the fall, the province asked Hydro to freeze the wages of IBEW employees for two years. The government said the “reset” is necessary while it copes with “dramatically falling revenues” and a “very large deficit” anticipated for 2020-21, owing to the pandemic.

The government defended itself by stating it is within their purview to set bargaining mandates for the public sector.

At the time, Mike Espenell, IBEW Local 2034 business manager, said the government’s proposal was a “difficult pill to swallow,” since union members took three unpaid days off to avoid temporary layoffs for some members early in the pandemic.

The wage freeze request comes despite a court decision last summer that struck down government legislation that sought to keep wages the same for more than 100,000 public sector workers for two years. The province is appealing the decision.

IBEW is the largest bargaining unit for employees at Hydro.