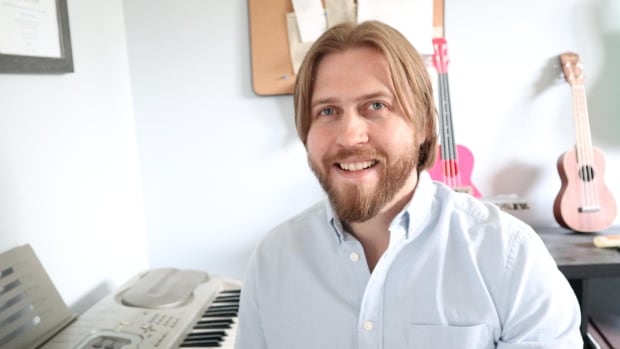 Music teachers in Manitoba are hoping for an uplifting finale to Music Month as they battle stress and fatigue while constantly adapting to ever-changing provincial guidelines.

“More than half [of teachers] aren’t in their homeroom,” said Jordan Laidlaw, a music teacher and doctoral student in Winnipeg who is carrying out research on the welfare of music teachers this year.

“Some have had to innovate to music lessons on a travelling cart with different instruments, sanitizing them in between, trying to be punctual while still providing rich learning experiences for children.”

He is collaborating with Shellagh Chadwick, an associate professor of music education at Brandon University. The pair are gathering information on teaching during the pandemic — including teachers’ well-being and their concerns for the future. As part of the research, they sent an online survey to music teachers.

They said 84 per cent of teachers surveyed felt fatigued from work, and almost half considered early retirement or a change in their career — all because of changes and disruptions caused by COVID-19.

Just over half of music teachers who responded said they’ve had to teach in new subject areas, and many more said they didn’t receive any professional development in their new area.

“All of this creates stress, and constantly having to pivot. About a third who responded said they are self-medicating, with an increased use of cannabis and alcohol,” said Laidlaw. Many felt their confidence as a teacher had decreased.

The survey, which took place between mid-February and April 5, was answered by 218 music teachers throughout the province. It’s estimated there are about 500 such specialized educators in Manitoba.

The results are being discussed at the same time as May has been declared Music Month by the minister of education.

Chelsey Hiebert, the executive director of the Manitoba Band Association, isn’t surprised by any of the findings.

“It’s sad. All the feedback we have been getting across the board is how it is recreating the wheel,” Hiebert said.

“Regardless if they have one year experience or 30 in the field, they all feel like first-year teachers again because of the constant change, and learning to do things in new ways is overwhelming.”

Music teachers have faced ever-changing choir and ensemble restrictions, teaching indoors and even moving outside, then coming up with a hybrid of in-person and online options — all in an effort to keep students engaged and connected during the pandemic.

The bonus, says Hiebert, is that all those working as music educators have learned new skills, which most of the teachers surveyed confirmed. Just what those new skills are is part of a questionnaire included in the research, and that information is still being compiled.

“The amount of change and innovation has been incredible — pivoting on a dime, and learning the new technology that goes with it. There is no live interaction on Zoom,” said Hiebert.

“All teachers and performers are now learning audio engineering — how to combine tracks and video, and producing incredible projects. That would normally take a whole team and teachers are doing it individually.”

On another positive note, a majority of teachers surveyed believe students are still engaged in music. But both Hiebert and Laidlaw say they are concerned about declining enrolments.

“That’s because a kid that maybe signed up for choir or band, and then finds out, ‘I joined choir but I can’t sing because of restrictions.’ They say, ‘Forget this, I am dropping out,'” said Laidlaw.

“That directly impacts music teachers’ programs and their numbers. They are very concerned for the future, post-pandemic.”

Hiebert says enrolment is the No. 1 issue going forward. A drop in numbers this year likely means a drop in enrolment next year.

“The natural mentorship that happens in band communities won’t happen this year because bands aren’t playing. I think it is important to remember band is more than just a subject for most students, it’s a real social hub. Now that they have lost that, there is going to be a hit on the community for a few years,” said Hiebert.

The research also involves a questionnaire which will give Laidlaw and Hiebert more specifics. They are also hoping to start up focus groups later this month to look at the music educators’ experience with COVID-19 and whether they feel safe at work.

It’s all information, Laidlaw says, that shouldn’t be taken lightly and should be supported by government and administration.

“Music education is important for so many kids across Manitoba. It can be such an outlet, especially for disadvantaged children. It can even be a form of therapy,” said Laidlaw.