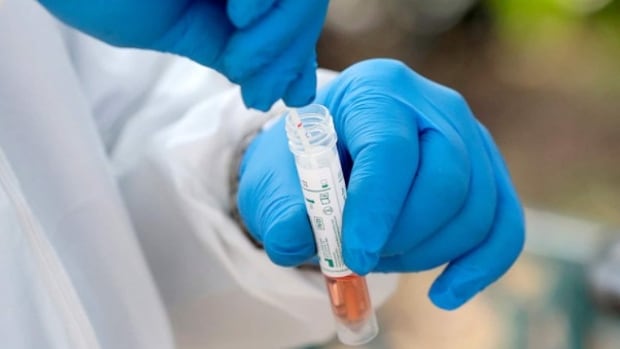 Manitoba reported 329 COVID-19 cases and no deaths on Tuesday but it did hit a worrying new milestone.

The seven-day average for daily cases reached 427, passing a high of 424 set during Manitoba’s second wave.

The number of people in hospital due to the coronavirus dipped by one to 214. The number of COVID-19 patients in intensive care also declined by one to 59, and 13 of those patients are under the age of 40, according to a provincial spokesperson.

The total number of patients in ICUs, including those with and without COVID-19, sits at 111 on Wednesday. At the current rate, in a matter of weeks Manitoba could surpass the second wave record of 129 patients in ICUs, according to government models.

Hospitalizations shot up recently on the heels of a sharp increase in cases over the past month. That has forced the province to quickly add more ICU beds to four hospitals.

Manitoba’s vaccination campaign has ramped up simultaneously, as vaccine supply has increased; 45.4 per cent of adults have received at least one dose.

The province expanded vaccine eligibility to anyone 24 and up on Tuesday.

Manitobans can book an appointment at a provincial supersite or pop-up clinic online or call 1-844-626-8222.

The majority of new cases — 235 — are in Winnipeg. Another 34 cases were detected in the Prairie Mountain Health region, 28 in Southern Health, 24 in Interlake-Eastern and eight in Northern Health.

The number of active cases of more contagious coronavirus variants has jumped by 465 cases, or 35 per cent, since Saturday. They now make up 1,810 of Manitoba’s overall 3,837 active cases.

The total number of variant cases is now 4,611.

The province doesn’t update its variant-tracking dashboard on Sundays and Mondays, so the total on Tuesday is from three days.

There have also been 16 new cases of the P1 variant originally identified in Brazil, bringing the total number of cases of that strain to 36.

P1 represents fewer than one per cent of known variant cases in Manitoba. The majority are the B117 variant of concern associated with the U.K., which accounts for over half of variant cases in the province so far. The remainder, or 46 per cent, are primarily listed as unspecified, while about half a per cent are the B1351 variant first found in South Africa.

So far, 997 Manitobans have died due to COVID-19, including 24 linked to variants.