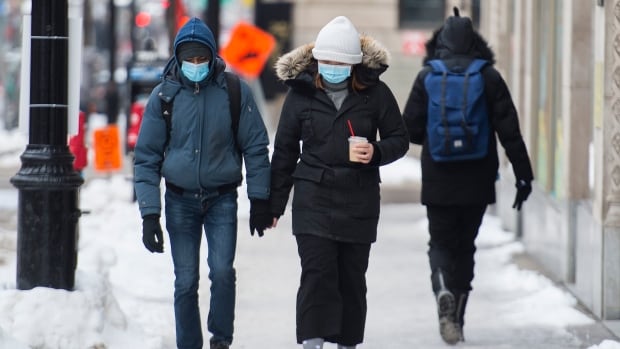 Manitoba reported its lowest daily increase in COVID-19 cases in nearly two weeks on Sunday, when 58 new infections were reported in a news release.

Most of those cases are in the Northern Health Region (25) and the Winnipeg health region (24), the release says.

The last time Manitoba’s number of daily new COVID-19 cases was that low was on Feb. 8, when 53 new infections were announced.

Two more people have died in Manitoba after contracting COVID-19.

The deaths announced Sunday are a man in his 70s and a woman in her 80s, the release says. The woman was from the Winnipeg health region, while the man was connected to the outbreak at Niverville’s Heritage Life Personal Care Home.

Manitoba’s five-day test positivity rate is still 5.3 per cent, while Winnipeg’s rose to 4.1 per cent from four per cent on Saturday.

Officials said all four of those cases were linked to international travel and have since recovered.

There are now 208 COVID-19 patients in hospital in Manitoba, up by two since Saturday. Thirty-one of those people are still in intensive care, the release says.

Manitoba has now identified 31,386 COVID-19 cases, including 29,322 people who have been deemed recovered. There are now 1,180 active cases in the province, though officials have previously said that number may been inflated by a data entry backlog.

There were 2,024 COVID-19 tests done in Manitoba on Saturday, which brings the province’s total number of swabs done since early last February to 512,566.