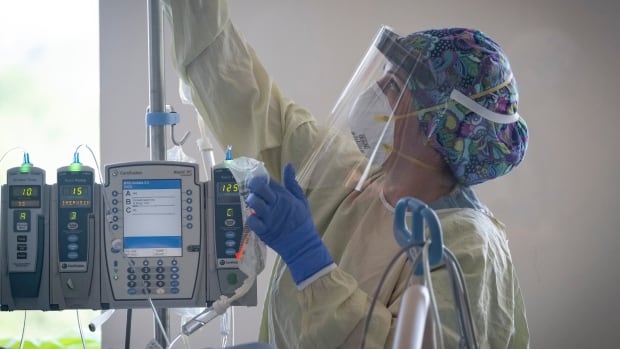 Three Manitoba patients with COVID-19 have been transferred to a Thunder Bay, Ont., hospital, as a spike in admissions has placed the province’s intensive care capacity at “significant risk,” a spokesperson said.

The first two patients were transferred to the Thunder Bay Regional Health Sciences Centre in northwestern Ontario Tuesday because of a combination of “continued high admissions, no ICU patients that were sufficiently recovered for a move to a medicine ward, and an increase in the number of very sick patients in our medical wards at risk of needing to be transferred into ICU,” a Manitoba Shared Health spokesperson wrote in an email Wednesday.

That “placed our critical care capacity at significant risk,” the spokesperson wrote, leading to the decision to transfer two stable, COVID-19-positive ICU patients to Thunder Bay — about 600 kilometres east of Winnipeg — for ongoing care.

“These transfers gave us some much needed capacity in the immediate term while planning continues to shore up staffing resources within our ICUs,” the spokesperson wrote.

A third ICU patient was sent to Thunder Bay on Wednesday, the spokesperson said in the evening.

This is the first time Manitoba has transferred patients out of province since the pandemic began more than 14 months ago, according to Shared Health, the provincial organization responsible for co-ordinating health-care services in Manitoba.

Manitoba’s ICU capacity has been stretched in recent weeks, as the province has seen a sharp rise in COVID-19 cases during its third wave.

There simply isn’t the staffing to treat everyone, Kumar says. He believes that’s due to decisions made at the provincial level to consolidate health care, and to public health measures that lack teeth.

“It’s related to decisions that were made outside of the health-care system proper. Had we controlled the numbers and had we implemented restrictions when we should have, we wouldn’t be dealing with this.”

As of Wednesday, there were 80 patients with COVID-19 in Manitoba intensive care units, and 131 ICU patients in total (including those who do not have COVID-19).

That number has now surpassed the peak during the pandemic’s second wave in December, when Manitoba saw a high of 129 patients in intensive care.

Pre-pandemic, the normal ICU capacity in the province was 72.

Of the patients now in ICU with COVID-19, 10 are under the age of 40, Shared Health’s spokesperson said.

“We cannot stress enough to Manitobans that we are seeing patients who are younger and healthier than those we saw during Wave Two,” the spokesperson said. “These patients are very, very ill and they require our care. We cannot sustain these kind of surges for long.”

“We need to bring down these numbers.  There’s far too much strain on our health-care system,” he said.

Shared Health says the surge of COVID-19 patients is making it more challenging to care for those who don’t have the disease.

Non-emergency surgeries are being postponed so space and staff can be used to meet the COVID-19 demands, while some patients are being moved out of Winnipeg, or between facilities in rural Manitoba, the department says.