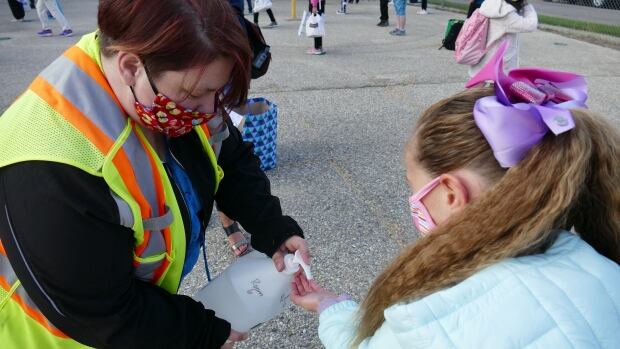 With September only a few weeks away, and COVID-19 concerns still very much a reality, many questions remain about what school will look like this fall in Manitoba.

A provincial spokesperson said Friday the back-to-school plan will be released in the coming week. For now, here is a round up of what we know, and don’t know, about schools and COVID-19 so far.

Last Monday, Chief Provincial Public Health Officer Dr. Brent Roussin said the goal is to have school return to normal as much as possible for students this fall.

“We know that COVID is still going to be circulating, especially amongst the unvaccinated, so we’re going to have to have plans that are flexible,” he said.

“But what we do know is we want to do whatever we can to get kids back to school and to keep them in school with as much normalcy as possible.”

He said he couldn’t provide any more details beyond that, but that more information would be coming soon.

In May, Education Minister Cliff Cullen announced $58 million in funding to help schools cope with COVID-19 in the upcoming academic year. Part of those funds come from the federal government.

At the time, Cullen said the province was announcing the funding early because they expect schools will need to once again juggle COVID-19 concerns with delivering education in the 2021-2022 school year.

Most of that money — $40 million in total — will go toward hiring more school staff, learning and technology, and workplace health and safety, a news release from the province said.

Public health officials in Manitoba have been urging parents to ensure kids aged 12 and up are vaccinated in time for the start of the new school year, but the province hasn’t mandated it. Children under age 12 are not currently eligible for a COVID-19 vaccine in Manitoba.

Last week, Dr. Joss Reimer, the medical lead of the province’s vaccine task force, said parents would need to to get a first-dose appointment for their children by Tuesday, July 27 if they wanted their kids to be fully immunized in time for the start of school.

Otherwise, they won’t have enough time to get their second dose and develop immunity before school resumes in early September, Reimer said at a news conference on July 21.

Reimer also said the province is looking into whether vaccines could be offered in schools.

During an interview with CBC Manitoba’s Information Radio last week, Reimer was asked about whether the province could make it mandatory for students to be vaccinated before attending school.

She said it is something the task force has discussed but hasn’t made any official recommendations to the provincial government about.

Information Radio – MB10:09If you aren’t vaccinated can you keep it that way since our provincial test positivity rate is right at the level when community spread isn’t occurring?

11 new cases of Covid yesterday in the entire Province. It’s been nearly a year since that last happened. What does it mean now? Dr. Joss Reimer joins us on Information Radio. 10:09

Currently, there are no COVID-19 vaccines approved in Canada for those under the age of 12.

The Pfizer-BioNTech vaccine is approved for youth 12 and older, but the other three vaccines approved in Canada — Moderna, AstraZeneca-Oxford and Johnson & Johnson — are only approved for people 18 and up.

There are several trials happening right now to test the effectiveness and safety of existing vaccines, although a vaccine for kids isn’t expected before the end of the year.

While children under 12 aren’t eligible for any COVID-19 vaccines yet, officials have said the best way to protect them is to get as many eligible people vaccinated as possible.

“If we have staff and eligible students vaccinated, we’re going to see much less transmission occurring,” Roussin said last Monday.

On Wednesday, Dr. Reimer was asked if the province would consider basing eligibility on a child’s birth year versus their age, as other provinces have done, to allow more children to get vaccinated.

At this time, the province is sticking with age-based eligibility because that’s what’s recommended by Health Canada and that’s what was used in vaccine studies, Reimer said.

But when the province makes a decision on delivering vaccines in schools, it will revisit this issue, she said.