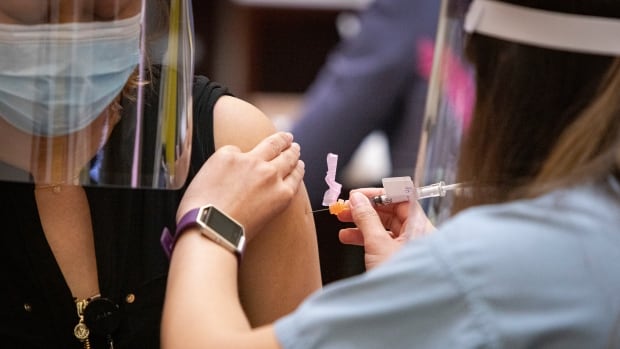 Manitoba’s test positivity rate continued its decline on Saturday, reaching a low it hasn’t seen since early October, as the province reported 90 new cases of COVID-19.

Manitoba also reported four more deaths linked to COVID-19 on Saturday, as it announced most of its new cases were again split between the Northern Health Region, which reported 37, and the Winnipeg health health region, which had 34.

There are also eight new cases in both the Southern and Interlake-Eastern health regions and three in the Prairie Mountain Health region, a news release from the province says.

Saturday’s update comes one day after Health Canada announced it has approved a third COVID-19 vaccine.

The two-dose shot from AstraZeneca being added to the mix will help speed up Manitoba’s vaccine rollout, the head of the province’s vaccine implementation task force said on Friday.

But Dr. Joss Reimer said exactly how much of an impact it will have remains to be seen as Manitoba waits to see how many doses it will receive and when.

The province also expanded the list of who’s eligible for a COVID-19 vaccine again on Friday, days after it started allowing members of the general population to sign up for shots based on age.

The deaths announced on Saturday are all from the Winnipeg health region. They are three women (two in their 80s and one in her 90s) and a man in his 90s.

None of the latest deaths, which bring Manitoba’s total fatalities linked to COVID-19 to 893, are linked to any known outbreaks in the province.

There are now 189 COVID-19 patients hospitalized in Manitoba, down by two since Friday. Twenty-seven people are in intensive care, down by one.

The province also floated a list of possible changes to its pandemic restrictions earlier this week, as it considers easing some rules amid slowing spread of the illness.

Some of those adjustments, including increasing outdoor gathering sizes and letting families form a “bubble” with another household, could come as early as next week.

Manitoba has still only identified five cases of the B117 coronavirus variant first detected in the U.K., with no new cases of the more contagious strain reported on Saturday.

Two previously announced COVID-19 cases were removed from Manitoba’s total because of a data correction, the release says. That brings the total number of cases identified in the province to 31,809.

Of those, 29,708 people are considered to have recovered, while 1,208 are still deemed active — though health officials have said that number could be inflated by a data entry backlog.

There were 1,681 COVID-19 tests done in Manitoba on Friday, bringing the total number of swabs completed in the province since early last February to 523,507.