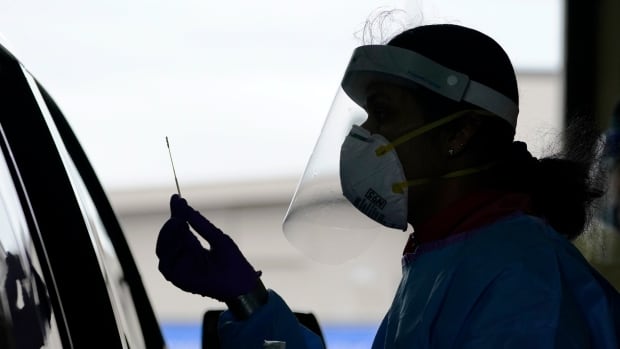 Two Winnipeg men in their 20s have died after getting COVID-19, including one who contracted a more contagious coronavirus variant, the province said in a news release on Saturday.

That man tested positive for the B117 strain first identified in the U.K., the release said.

The variant is by far the most common of the more infectious strains identified in Manitoba, accounting for nearly half its known active COVID-19 cases, the province’s online variant dashboard says.

A man in his 70s from the Prairie Mountain Health region who had the same variant has also died, the release said. Those three deaths bring Manitoba’s total linked to COVID-19 to 1,045.

The province also reported 357 new cases of the illness, about two-thirds of which are in the Winnipeg health region.

The breakdown of Manitoba’s latest COVID-19 case locations wasn’t included in Saturday’s daily news release because of technical issues, but it was reflected on the online COVID-19 dashboard.

Other information normally included in the province’s daily COVID-19 update, including the number of people in hospital with the illness, was not included because of technical issues, the release said.

That information will be updated online as soon as possible — though a spokesperson for Shared Health said data on the number of people in Manitoba hospitals with COVID-19 won’t be available today.

As of Friday, there were 312 people being treated in Manitoba hospitals after getting the illness.

That included 69 in intensive care units across the province — but didn’t reflect more than two dozen patients transferred outside Manitoba, as the province works to free up space in its overwhelmed critical care units.

The number of Manitobans currently being treated in intensive care units outside the province is now 28, up by one overall since Friday. That includes 27 at hospitals in Ontario and one in Saskatchewan.

That’s after three more patients were moved to hospitals in Ottawa and Sarnia, Ont., on Friday. One of those COVID-19 patient transfers was the first for Manitoba involving a Canadian Armed Forces crew and plane, the spokesperson said.

Two Manitoba patients were also returned to their home province from Ontario on Friday, after their conditions improved and they no longer required intensive care. Both were placed in a hospital medicine unit for further care when they got back, the spokesperson said.

Three ICU patients in total have now been returned to Manitoba after being transferred. With those patients included, a total of 31 COVID-19 patients have been moved to hospitals in other provinces this month — 30 to Ontario and one still in Saskatchewan.

Meanwhile, Manitoba’s five-day test positivity rate dipped slightly to 12.4 per cent, down from 12.5 on Friday, the dashboard said.

As well, the province reported a new walk-in COVID-19 test site opened at 1125 Empress St. in Winnipeg on Saturday. It’s open daily from 8 a.m. to 5:30 p.m. and also offers testing by appointment. Those spots can be booked by calling 1-855-268-4318, which is toll-free. More information about testing is available on the province’s website.

Manitoba has now identified 50,499 cases of COVID-19 since the beginning of the pandemic last year. That includes 44,819 deemed recovered, the province’s news release said.

Another 4,635 COVID-19 cases are still considered active, with over 60 per cent stemming from the more contagious variants of the coronavirus that causes the illness, the province’s online data says.