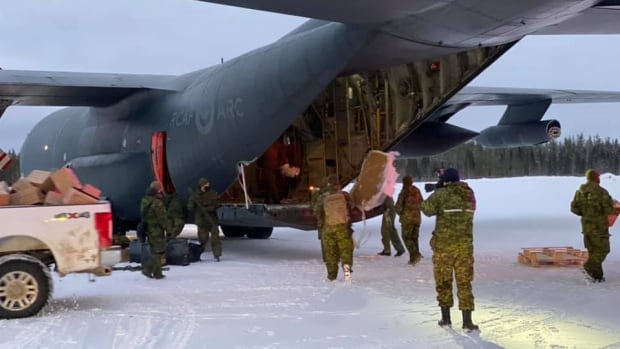 More help from the Canadian Armed Forces is on the way to Shamattawa following a desperate plea from the First Nation’s chief.

The northern Manitoba fly-in community has seen a spike in COVID-19 cases, with 25 per cent of people living on reserve testing positive for COVID-19, according to Chief Eric Redhead.

Both an Armed Forces spokesperson and Redhead have confirmed to CBC that a plane is on the way to the community now with additional medical and regular Forces members.

On Friday, Shamattawa Chief Eric Redhead said his community had passed its breaking point. He said most pandemic team members had tested positive or were in isolation.

“We need to act now. There’s no more waiting,” he said in an interview with CBC News Network.

The chief blamed overcrowding in his community for the rapid spread of the illness on the First Nation.

An elder who got COVID-19 had to be airlifted to Winnipeg, where she is in intensive care, Redhead said. He said everyone in her crowded home tested positive.

Redhead said an small military assessment team previously sent to the community wasn’t enough support. He repeated a call for an additional 60 to 70 members to help in the COVID-19 response in the community, about 745 kilometres northeast of Winnipeg.