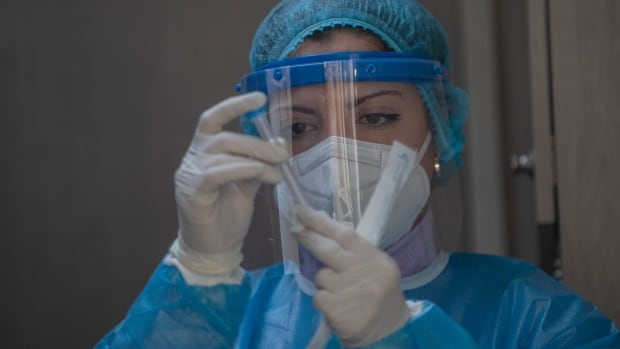 Manitoba reported 531 new COVID-19 cases on Sunday — a single-day increase the province only surpassed one time at the height of its second wave.

That happened on Nov. 23, when there were 546 new infections announced in Manitoba. Sunday’s update continues a trend in recent days of the kind of high caseloads the province hasn’t seen in months, following 488 cases reported on Saturday and 502 on Friday.

Nearly 80 per cent of Sunday’s new cases are again in the Winnipeg health region, which reported 422 infections and a five-day test positivity rate that rose to 13 per cent from 12.6 on Saturday. Provincially, that rate rose to 10.9 per cent from 10.5.

Manitoba also announced the deaths of three women linked to the highly contagious B117 coronavirus variant first identified in the U.K.

Two were from the Winnipeg health region — one in her 50s and another in her 80s — while the third woman in her 60s was from the Prairie Mountain Health region, the province said in a news release.

There are now 210 COVID-19 patients hospitalized in Manitoba, up by 10 since Saturday. Fifty-two of those people are in intensive care, down by two.

Numbers on coronavirus variants in Manitoba won’t be updated again until Tuesday. As of the most recent update on Saturday, there were 3,665 cases of the more transmissible strains detected in the province, including 1,345 considered active, according to Manitoba’s online variant dashboard.

Those variants now make up at least 38 per cent of Manitoba’s active COVID-19 caseload, which sits at 3,499 as of Sunday.

Manitoba has now identified a total of 41,953 COVID-19 cases, including 37,461 people who are now considered recovered.

The update comes hours after stricter pandemic rules took effect after the stroke of midnight on Sunday in Manitoba.

The latest restrictions outlaw in-person dining at restaurants and shut down businesses ranging from gyms to salons. Indoor activities including church services and sports are also banned for at least three weeks.

On Sunday afternoon, the provincial government announced all kindergarten to Grade 12 schools in Winnipeg and Brandon are moving to remote learning from Wednesday until May 30.

The move follows growing calls from parents and teachers to move to remote learning as COVID-19 cases continue to surge in Manitoba.

Manitoba has now doled out 557,420 doses of COVID-19 vaccine, with about 44 per cent of its adult population now partially immunized, according to the province’s online vaccine dashboard.