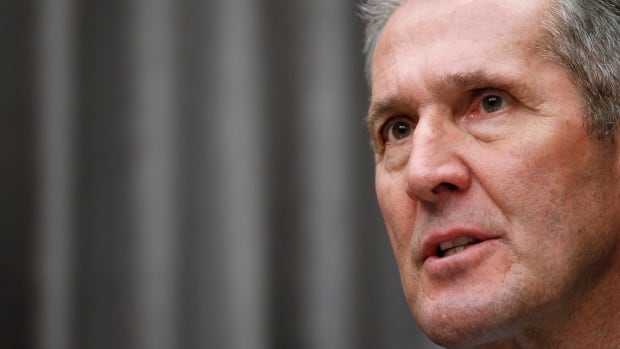 Manitoba’s premier on Saturday repeated his call for unused doses of COVID-19 vaccines in the U.S. to be shipped to Canada — and said President Joe Biden needs to “get out of the way.”

Brian Pallister said the Prairie province’s vaccine team has told him they could vaccinate an additional 100,000 Manitobans in the next 10 days if they had the vaccine supply to do it.

“We have trucks with freezers ready to go…. We could have them back by tonight,” Pallister said at a rare Saturday morning news conference.

“Thus far, President Biden has said no. I say, ‘Let’s go, Joe.’ The right answer is yes. We need your help, and we need it now.”

Pallister pointed to Manitoba’s agreement to have truckers vaccinated in North Dakota — which he said has so far allowed more than 1,000 truckers crossing the border to get immunized — as an example of how provinces and states want to work together on their vaccine rollouts.

Manitoba was working on another plan with the state to ship some of its unused doses up to Canada, Pallister said, but it was “kiboshed” by the White House.

“We and North Dakota have built a very strong relationship. We had an agreement in the planning stages we were wanting to implement that would have [gotten] thousands of vaccines up here,” Pallister said.

Officials said this week Manitoba still plans to get two doses to everyone 12 and up who wants to be vaccinated by the end of July. The target for delivering all first doses is still June 9, the province’s latest vaccine technical briefing document says.

Meanwhile, people who meet certain criteria were able to start booking appointments for their second doses on Friday.

Pallister’s call for more vaccines comes as Manitoba battles its rising third wave of COVID-19, which has strained the province’s capacity to care for its sickest patients.

Five intensive care patients from Manitoba have now been transferred to hospitals in Ontario to free up space, with plans to move as many as 15 more if needed, officials said.

Intergovernmental Affairs Minister Dominic LeBlanc said he expects the federal government will be able to “do what’s necessary” to help Manitoba by the end of the weekend.