Opening day of Manitoba’s spring session of the legislature in 1999 became one marked by riot police, pepper spray and an angry crowd pushing its way through the doors.

“We have people trapped between the doors, please step back,” shouted a voice from a loudspeaker.

But even that day was a far cry from the scene at the U.S. Capitol this past week, which a former Manitoba premier — who later became Canada’s ambassador to the U.S. — describes as “a unique situation” incited by the president.

Back in April of 1999, a rally of about 500 people, led by Indigenous groups lobbying the Manitoba government for better housing and education and demanding action on poverty and unemployment, knocked down steel barricades and pushed past police to charge the front doors.

They were met by at least 70 police and sheriff’s officers, as well as riot police, who tackled some to the marble floor of the foyer.

“Somehow the Filmon government has to hear us, has to listen,” Bill Traverse, then-grand chief of the Southern Chiefs’ Organization, said at the time about Gary Filmon’s Progressive Conservative government.

“We have to say what has to be said.”

WATCH | The Manitoba Legislature is stormed by protesters on April 6, 1999: 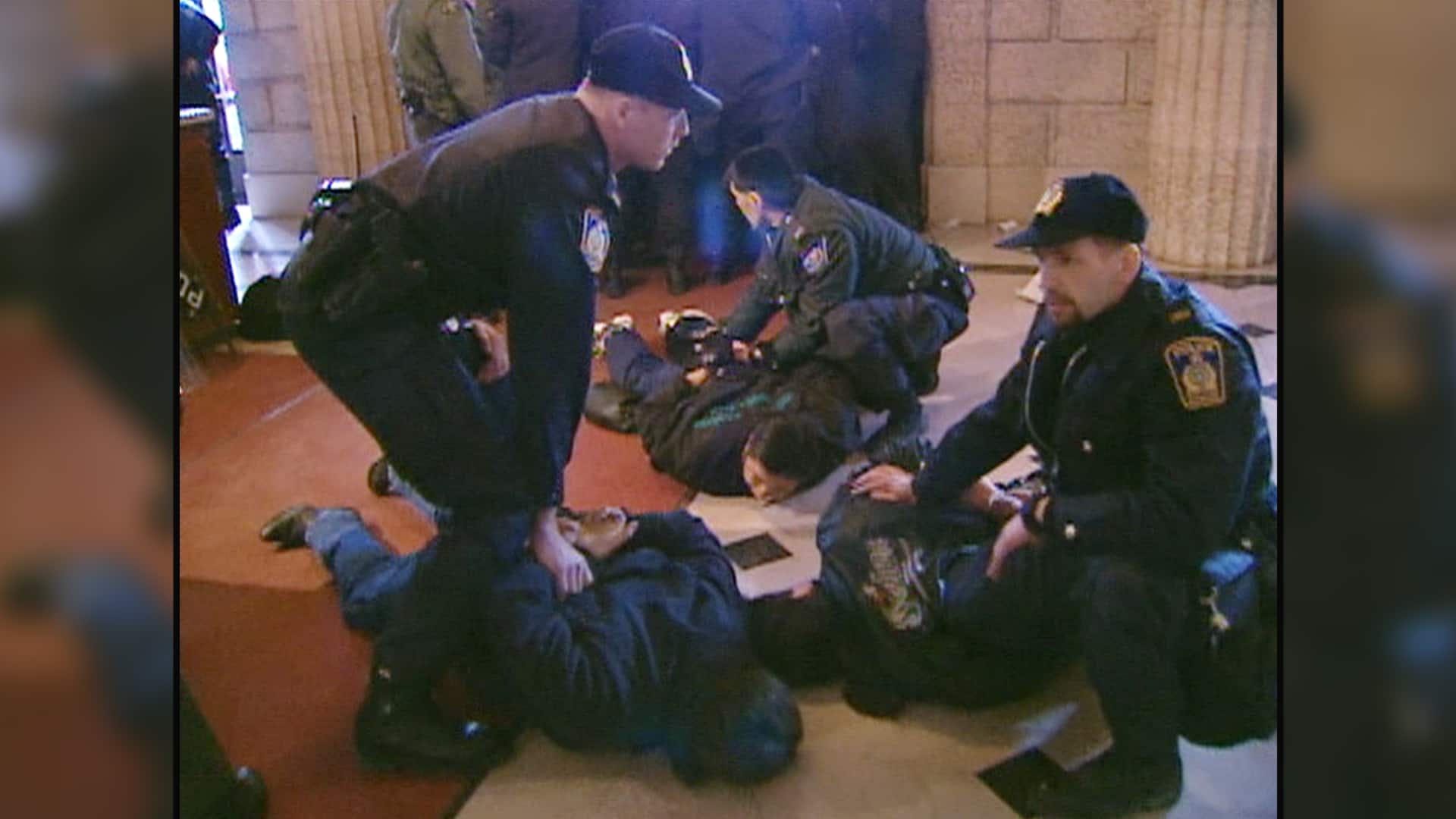 April 6, 1999, was supposed the opening day of the spring session at the Manitoba Legislature, but it turned into a day of protest, complete with riot police and pepper spray. Indigenous leaders say the protest was driven by anger at the province over claims the government did little to help with education or high unemployment. 1:27

A large chunk of Traverse’s jacket was ripped off his back in the clash.

But it all quickly came to an end.

Several Indigenous leaders, such as Francis Flett, the grand chief of Manitoba Keewatinowi Okimakanak, urged the crowd to let cooler heads prevail, according to a May 1999 report by Windspeaker News.

“We don’t want anyone injured here,” she said. “We’ve made our point and have sent a message to the government.”

It was a scene unusual in its intensity for the Manitoba Legislative Building, but as the provincial seat of government, the legislature has routinely been a rallying point for protests.

More recently, hundreds of people have descended on the legislative grounds for protests around Black Lives Matter, climate change, and against COVID-19 restrictions.

“Sometimes you almost have to have air traffic control, you know, when one or two groups are planning different issues to be protested at the same time,” said former premier Gary Doer, joking about how many people sometimes fill the grounds.

Usually, speeches are made, signs are waved and after a couple of hours the crowds peacefully disperse and move out.

But there have been times when the crowds pushed their way inside. 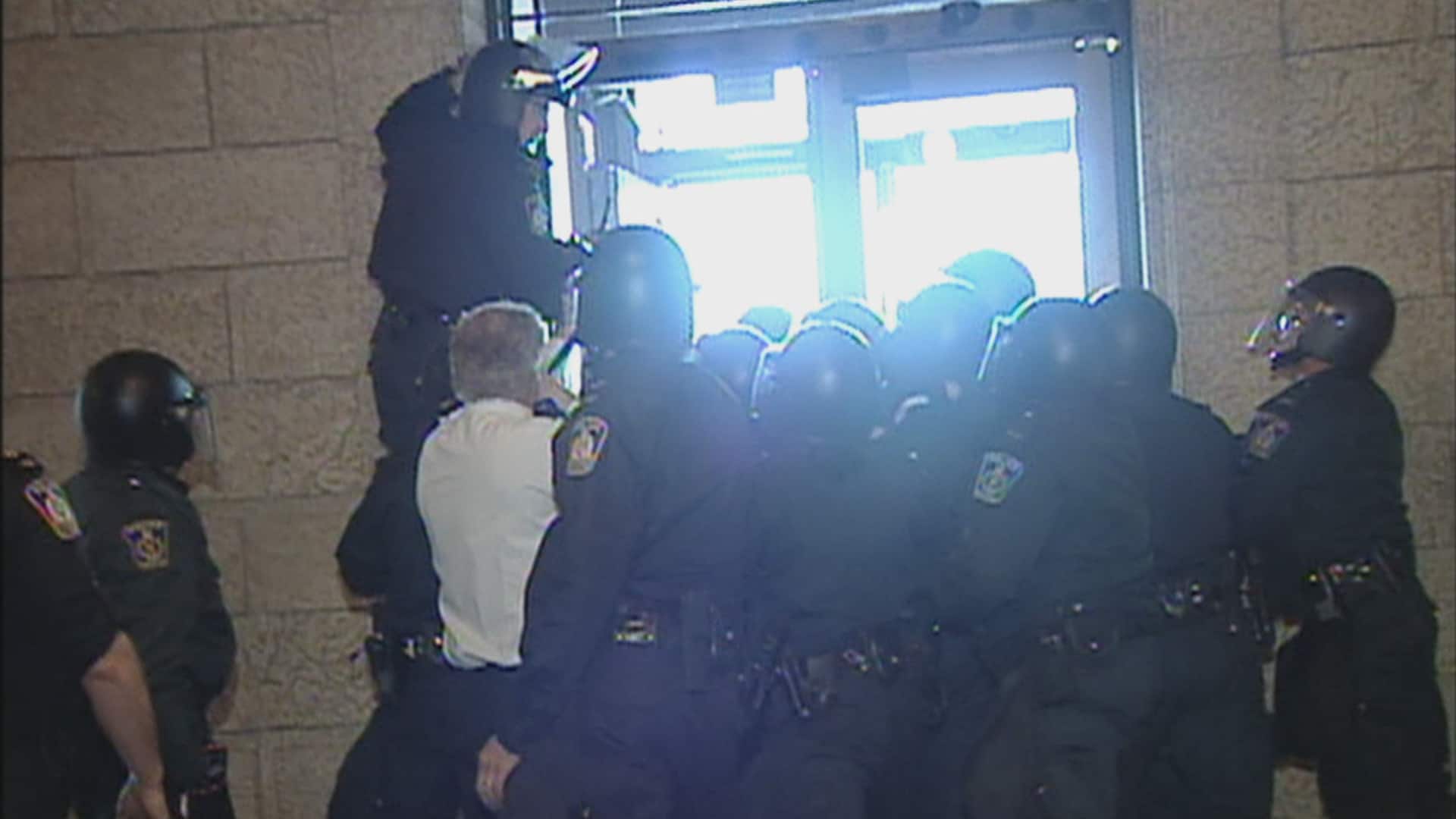 Opening day of Manitoba’s spring session of the legislature became one marked by riot police, pepper spray and an angry crowd pushing its way through the doors in 1999. 2:43

In May 1996, about 300 teachers stormed the building to protest government proposals aimed at stripping their collective bargaining rights.

Crowding the hallways, they chanted “resign, resign” outside the office of education minister Linda McIntosh.

Earlier that day, at its annual general meeting, the Manitoba Teachers’ Society had denounced proposed government changes to collective bargaining. They then took their outrage to the legislative building.

“There is nothing as draconian as these proposals anywhere in Canada,” said then-MTS president Ken Pearce, according to a report by the Alberta Teachers’ Association.

“Teachers are angry on a level I’ve never seen before. And it’s no wonder. Our bargaining rights will become a mere shell of what they are now — we’ll all be reduced to collective begging,” he said.

WATCH | A 1996 CKND report on the teachers’ protest at the Manitoba Legislature:

In 1990, university students rallied at the legislative building to protest what they said was underfunding of post-secondary institutions.

A crowd from the three Winnipeg universities and Brandon University chanted Filmon’s name in taunt of the premier while they listened to speeches from opposition party politicians.

“But before the Liberal spokesman could finish, all hell broke loose,” according to an account in the book Taché Hall: Celebrating a Century of Residence Life.

“What had started as a few people muttering ‘Storm the Lege’ had turned into loud cries. Everyone looked at each other, and as soon as we had enough confidence in ourselves as a group, all it took was one signal. Then we stormed the Lege.”

While security looked on, students scrambled up the legislature’s main stairs and filled the second- and third-floor balconies of the centre block, the account says.

Everyone assembled for a sit-in as the university student union presidents met with Filmon and emerged about an hour later.

“All Filmon had ‘promised’ was a later meeting,” the Taché Hall account says, noting the students felt hollow but headed out.

None of the events in Manitoba can be compared in any way to the chaos that erupted at the Capitol in Washington this week, when a mob supporting outgoing President Donald Trump pushed past barricades and forced their way inside the U.S. Capitol.

Five people have now died — including a Capitol Hill police officer — as a result of the riot that happened hours after a Trump said at a rally he would “never concede” to president-elect Joe Biden, and urged the massive crowd to march to the Capitol.

In the Manitoba incidents, protesters weren’t goaded by someone holding the highest seat of power; they did not attack any security or make it beyond the foyer to ransack offices. No windows were broken. No one died.

While the events at the Capitol will go down in history, the ones at the Manitoba legislative building hardly register in online searches. Doer, who was leader of the Opposition NDP at the time, doesn’t recall the 1999 protest at all.

“I never felt unsafe in the building, and I don’t recall anything that made me feel unsafe inside the legislative building,” said Doer, who is also familiar with the seats of power in the United States, where he was Canadian ambassador from 2009 until 2016.

“I noticed that when the Washington rioters were besieging the Capitol Hill, a lot of the windows were broken and the doors seemed to be pretty porous, which surprised me, having gone through that building a number of times when I was ambassador.”

That said, Doer noted he never felt unsafe in Washington, either.

“I witnessed the almost daily protests walking right by the embassy of Canada, on the way to the Capitol building … and there was never an experience of anything that represented a risk inside the building until this week,” he said.

When he attended the Capitol building for the state of the union address, “the security was incredible,” Doer says.

“So this [riot at the Capitol] was a unique situation, in my view. It was incited by President Trump,” he said. “It started with the president signaling it and messaging it and encouraging it this week.”

Despite the rarity of such outbreaks of disorder, Doer has no doubt “every legislature in Canada” is re-evaluating security procedures.

“You don’t want to ever [reveal] what your security procedures are because you don’t want, tactically, to be conveying that to people that may be interested to know what your vulnerabilities might be,” he said.

“I’m sure the emergency measures people, and the security people are reviewing it, but quietly.”

(5336)
(as of February 23, 2021 - More infoProduct prices and availability are accurate as of the date/time indicated and are subject to change. Any price and availability information displayed on [relevant Amazon Site(s), as applicable] at the time of purchase will apply to the purchase of this product.)

The Boy, the Mole, the Fox and the Horse

(53905)
(as of February 23, 2021 - More infoProduct prices and availability are accurate as of the date/time indicated and are subject to change. Any price and availability information displayed on [relevant Amazon Site(s), as applicable] at the time of purchase will apply to the purchase of this product.)

(as of February 23, 2021 - More infoProduct prices and availability are accurate as of the date/time indicated and are subject to change. Any price and availability information displayed on [relevant Amazon Site(s), as applicable] at the time of purchase will apply to the purchase of this product.)

How to Avoid a Climate Disaster: The Solutions We Have and the Breakthroughs We Need

(184)
(as of February 23, 2021 - More infoProduct prices and availability are accurate as of the date/time indicated and are subject to change. Any price and availability information displayed on [relevant Amazon Site(s), as applicable] at the time of purchase will apply to the purchase of this product.)

(12971)
(as of February 23, 2021 - More infoProduct prices and availability are accurate as of the date/time indicated and are subject to change. Any price and availability information displayed on [relevant Amazon Site(s), as applicable] at the time of purchase will apply to the purchase of this product.)