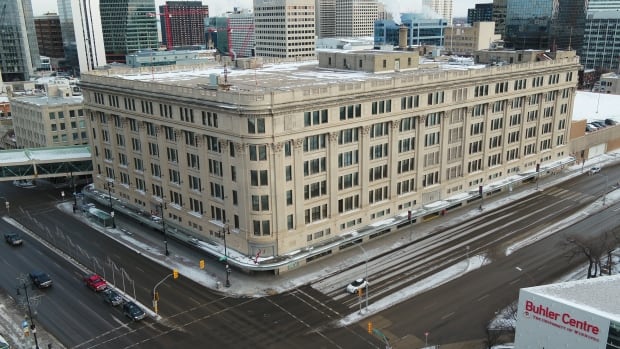 It was an unexpected pledge in Manitoba’s 2021 budget: a $25-million commitment toward the redevelopment of the boarded-up Hudson Bay building in downtown Winnipeg.

Jino Distasio, a professor of geography at the University of Winnipeg, called it a surprising and significant promise, especially for a struggling downtown.

“It’s one of things that is really hopefully going to ignite a broader discussion on what can we do with this historic building,” Distasio said. “How can we take those several hundred thousand square feet and really think about that post-COVID environment where downtown [is] thriving again like it was pre-COVID.”

Finance Minister Scott Fielding said the province will create a $25-million trust for the revitalization of the downtown building and is encouraging other levels of government to chip in.

The six-storey building, a fixture at the corner of Portage Avenue and Memorial Boulevard since 1926, closed permanently last fall.

Distasio said it’s unlikely a single tenant will occupy the building because of its size, measuring 655,755 square feet.

When it comes to reimagining the space, he says the sky is the limit.

Niigaan Sinclair, an associate professor in the University of Manitoba’s Native studies department, agrees. He said the Hudson Bay Company’s colonial history cannot be ignored and he hopes the redevelopment will be a space for reconciliation.

While he applauds the provincial government’s fund, Sinclair said the project will require much more support given the building’s deteriorating condition.

A 2019 appraisal valued the building’s worth at $0, if not less due to the millions of costs associated with its sale and the $111 million in estimated renovations needed to bring it up to code.

“We need people from the private sector and people from all levels of government to be able to create this together,” Sinclair said.

Mayor not ready to commit funds

At a news conference Wednesday, Winnipeg Mayor Brian Bowman said the trust promised by the province is a positive move, but stopped short of committing municipal funding just yet.

The city has formed a committee to seek out options for the former department store.

“We’re just not at that stage yet, we want to hear from the committee who’s in dialogue with the Bay, who currently owns the building, and the fact that the province is stepping up with 25 million in trust, it definitely builds on the momentum that we’ve been trying to generate.”

Bowman says the committee will have a report coming soon and after that a decision will be made on contributing to the trust.

“It will help potential developers to know what’s on the table that can help make this redevelopment happen,” she said.

There is no shortage of ideas for the location, but Fenske said what will be important is that the space has multiple uses.

“Whether it’s education, social, residential, commercial, when all of that comes together that really contributes to a more vibrant downtown and success of a project.”