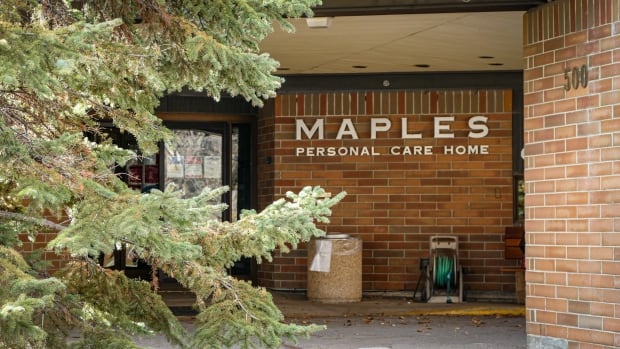 Those include breaches in infection control measures — most notably regarding proper use of personal protective equipment — issues with recording feeding and nutritional information, and the need to stabilize staffing, Trinidad said.

The WRHA doesn’t know for sure whether the PPE issues caused the outbreak or spread COVID-19 further in the care home, she said, but there are concerns about “potential breaches.”

“We don’t believe that that’s the sole cause of that spread. But we don’t have a clear picture yet of how that spread.”

Going forward, Trindinad said the health authority is working with the care home to ensure proper cleaning and replacement of PPE, and to ensure there are appropriate stations set up for staff to put on and to take off their equipment.

An official has been at the care home this week to monitor the situation there until the WRHA can ensure the safety of residents, she said.

Last Friday, staff at Maples made several 911 calls just after 7 p.m., according to the Winnipeg Fire Paramedic Service. Two residents were dead by the time paramedics got there.

Throughout the night, paramedics treated several dehydrated residents on site and transported three to hospital. On Saturday, officials revealed eight residents had died in a matter of two days.

On Monday, WRHA officials said there were only seven of 19 scheduled health care aides and five of seven scheduled nurses working that night, contrary to what Revera, the private company that owns the care home, told them previously.

At a town hall meeting held for families of residents on Tuesday, Revera reported 45 staff members were still off sick with COVID-19, and there were 10 active cases among residents.

More than two-thirds of personal care homes in Winnipeg are dealing with outbreaks of COVID-19, officials from the Winnipeg Regional Health Authority also revealed Friday.

While 189 have recovered, 68 have died, and 71 remain active cases, Kaminski said at a news conference Friday.

Personal care home management and staff are exhausted and resources are strained, she said during an update on how the WRHA is managing outbreaks of COVID-19 at personal care homes in the city.