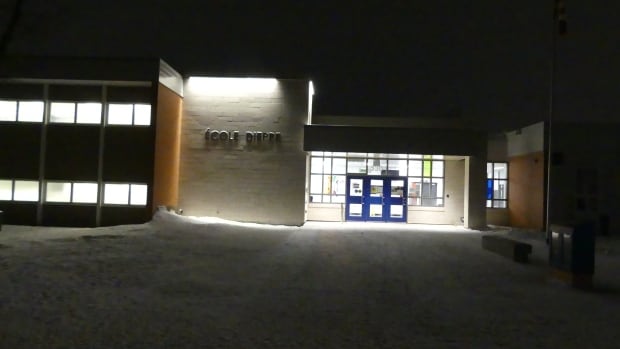 A suspicious man followed an École Dieppe student inside the school and talked to her for several minutes before leaving without any staff noticing.

The incident happened around 8:15 a.m. on Friday.

“A person had opened the door and the two of them walked in together,” Pembina Trails School Division superintendent Ted Fransen told CBC News.

“This was a stranger to the school, and followed the student into the gymnasium, where that student’s classroom is.”

The man and the student had a “brief conversation” before the man left. He was in the school for about five minutes in total, Fransen said.

There were no security cameras inside the gym, however, “so we have no way of confirming what happened in the gym. The camera doesn’t show that,” Fransen said.

In a letter to parents on Tuesday, superintendent Ted Fransen acknowledged that an earlier notification sent to parents on Sunday downplayed the “seriousness” of the incident by saying that the incident happened at the entrance to the school rather than the gym — even though the student told her parents later that evening that the man had been in the school.

“There were lots of moving parts. It was on the weekend. We were in consultation with the Winnipeg police. And in hindsight, I believe that parents should have been given more information,” Fransen said.

Fransen sent a second letter to parents on Wednesday, informing them that the man had in fact been in the school, and expressing “regret” that that information wasn’t included in the original letter.

“We understand this occurrence and additional information may cause some to feel concern,” Fransen said.

Police were notified over the weekend, and school officials have been in daily contact with investigators, Fransen said.

The student is safe and reported the incident to her parents later Friday evening, Fransen said.

In the letter sent to parents on Sunday, the man is described as being in his late 20s, medium height, slight build, wearing circular glasses, a black toque, black neck warmer, a black jean jacket (or lighter jacket), dark track or wind pants and black high-top sneakers.

Since the incident, Fransen said the school has been moved to the top of the priority list to receive an upgraded security camera system, which will increase the number of cameras and improve the image quality.

“I want to provide assurance to the Dieppe community, as well as all of our communities within Pembina Trails, that Pembina Trails staff take the safety of our students very seriously, and that we will always take steps and take measures to reduce situations, learn from the situation that we just experienced, and make sure that it doesn’t happen again,” Fransen said.

Parents have been asked to talk to their kids about safety plans going to and from school and to consider having students walk with a friend or family member.