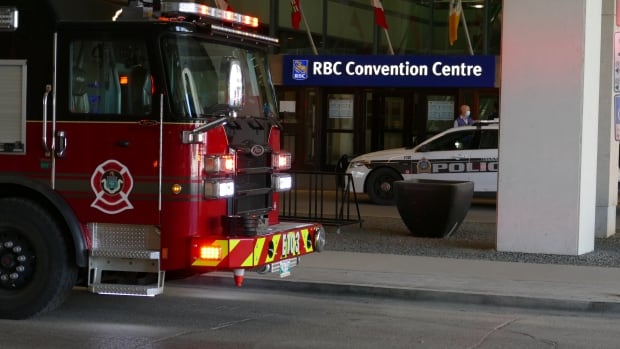 Late afternoon COVID-19 vaccine appointments are continuing at Winnipeg’s RBC Convention Centre on Monday after some were cancelled and people were evacuated over reports of a gas leak in the area, a provincial spokesperson says.

At about 2 p.m., a gas leak was reported, which led the province to cancel appointments for the next two hours.

At about 3:30 p.m., the supersite was cleared to reopen, and the province said anyone with an appointment after 4 p.m. will be able to attend as scheduled.

“We are in the process of determining how we will handle these postponed appointments,” they said in an email.

Manitoba Hydro tweeted shortly after the convention centre was evacuated that no gas leak had been found, but the utility will provide updates as information becomes available.

Anthonie Koop from Manitoba Hydro said the team completed a leak survey of the entire building and no natural gas was detected.

Winnipeg police asked people to avoid the area as traffic was blocked at Carlton Street and St. Mary Avenue, as well as at York Avenue and Edmonton Street. Those streets are now reopened.

The province says it will follow up directly with people whose appointments are affected, if the province has their contact information, to reschedule.