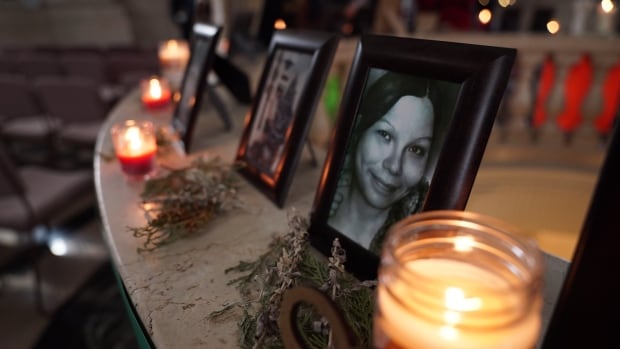 Instead of taking to the streets of Winnipeg, people gathered virtually on Valentine’s Day to show love for missing and murdered Indigenous women, girls and two spirit people and the families they’ve left behind.

Guests checked in from places like The Forks, Thunderbird House and the Manitoba Legislature, as well as across Manitoba to share music, prayers, dances and words of comfort for families and survivors and raise awareness of the human rights crisis.

In cities across Canada, families of murdered and missing Indigenous women, girls and two spirit people have marched on Valentine’s Day for more than a decade to call for justice and try to drum up tips in their cases.

This year was different in light of COVID-19, but still impactful, says Lisa Makwebak who has been part of organizing the Valentine’s Day event from the beginning.

“What a blessing that we can gather,” she said.

The event was derailed for about 10 minutes when the Zoom meeting was hacked and spammed with racist and homophobic remarks in the comments sections.

Organizers got a handle on the situation by blocking the people involved in hacking and offering support for those who may have been triggered by the comments.

Later in the evening, participants offered prayers for the people involved in the hacking.

Anderson-Pyrz says it’s especially important to highlight gender-based violence at this point in time because the pandemic has amplified the need for resources and support.

“It really highlights the lack of resources that are available and that the needs are so great. If we truly want to end all forms of gender-based violence, we have to ensure that there’s adequate resourcing and support out there for prevention, education and support services to impacted family members and survivors,” she said.

One way to address that is to research and call for the implementation of the recommendations of the Missing and Murdered Indigenous Women and Girls Inquiry.

The recommendations include a federally-coordinated, cross-jurisdictional national action plan to address violence against Indigenous women and girls, initiatives and programming to address root causes of violence and law reform.

“I think as a society, we all have a responsibility to stand up and speak out against all forms of gender-based violence.”