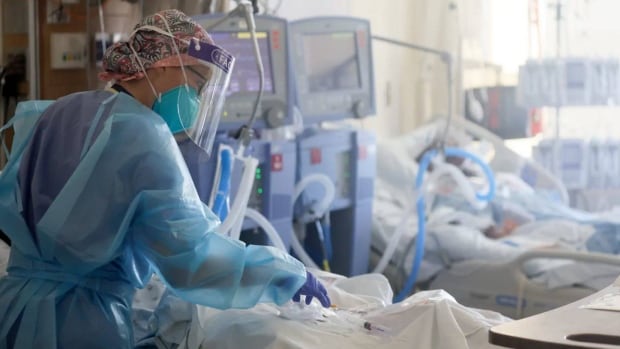 As Manitoba grapples with an overrun health-care system, doctors in Winnipeg are calling for the government to step in and ensure valuable nurses don’t burn out and leave the profession.

Dozens of doctors at three Winnipeg hospitals have signed their names to a letter sent on Saturday to Premier Brian Pallister and the acting health minister Kelvin Goertzen expressing “grave concern” over the state of nursing in emergency departments in the city, saying morale and staffing are at all-time lows.

“The term exhaustion comes to mind, but I don’t think that sums it up completely,” said Dr. Noam Katz, a St. Boniface Hospital physician who is among the more than 60 doctors who signed the letter.

“We deal literally with life and death daily. Once you start adding in this degree of fatigue, both from this prolonged pandemic as well as the exceptionally high number of hours that they are working … Stress levels go through the roof and it becomes something where certainly it can affect everybody’s physical and mental well-being.”

The letter says many nurses feel unsupported and unappreciated, and together with the other stresses is a recipe for burnout.

In December, the province signed a deal with the Manitoba Nurses Union to provide a temporary pay bump to nurses working in intensive care, COVID-19 wards and personal care homes. The emergency room nurses were left out of the deal.

“Quite frankly, we were all baffled by that decision,” Katz said.

“We have all of the COVID patients come through our department … in the most chaotic environment and often have the highest risk procedures that are done in the emergency department before they’re going in stabilized to places like the ICU or to COVID wards.”

CBC News has reached out to the premier and the acting health minister for comment, and will update the story when they respond.

On Sunday, nurses represented by the union began casting their votes on whether or not they want to take strike action after working without a contract for over four years.

Katz says patient care is being compromised because emergency departments are so understaffed.

In the St. Boniface ER alone, at least five beds, including those for the sickest patients, have had to go unused over the last few days, he said.

“We lose the ability to use the space that we already have because we don’t have the staffing available to keep these very, very valuable beds open,” Katz said.

“We’re always playing this terrible game of musical beds where we have people who are probably not ready to come off of monitors to move to other lower acuity areas of our department. But that also means when you don’t move them, you can’t get the people who are in the waiting room or with the paramedics into a bed and be able to treat them properly.”

The letter calls on the government to acknowledge the essential role of ER nurses in the care of COVID and other critically ill patients, and readjust their wages and benefits in a manner that’s in line with their contributions.

Katz adds: “I think when we talk about heroes and we talk about the people that are the pillars of our system, our nursing staff are way up on that list.”