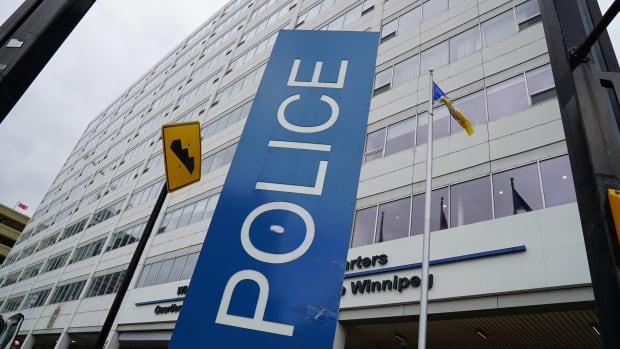 The Winnipeg Police Service is facing criticism that it exploited a man in distress and breached his privacy by posting photos online of his rescue, as he dangled from a bridge.

Around 3:45 p.m. Tuesday, police were called to the Disraeli Bridge at Higgins Avenue, which connects North Point Douglas to West Elmwood, after receiving several 911 calls reporting a man had climbed over the ledge of the bridge, a Thursday WPS news release said.

The first officer to arrive saw the man hanging on by the railing rungs about 11 metres from the ground. He sent two police officers to the top of the bridge so they could grab hold of the man until backup arrived, the release says.

Members of the Winnipeg Fire Paramedic Service later arrived and helped the two officers, while others blocked traffic on the roadway beneath the bridge, the release says.

The man was sent to hospital for a medical assessment, but wasn’t injured.

The news release issued by police Thursday, which was also shared on social media platforms, originally included photos of the rescue effort.

While some applauded police, many people on social media took issue with the fact photos were circulated. Though the man’s face was not visible, many argued the photos could identify someone who was in distress for the sake of the police promoting their good work.

Dr. Ashley Blais, a medical doctor who has been practising for nine years, says the photos breached the privacy of both the man and WFPS and police personnel.

For professionals like doctors, nurses and police officers, sharing such photos “is a breach of [the Public Health Information Act], unless we have explicit consent from the patient, or the person that is in question,” said Blais, adding that colleagues in the photo must also consent.

“We’re not allowed to share anything when we’re on the job. When we’re off, it’s different — but even then on social media, anything can be interpreted one way or another.”

Winnipeg resident Zach Fleisher found the incident significant enough that he sent an email to his city councillor and Mayor Brian Bowman, urging them to address and condemn the issue publicly.

“This is unacceptable; this individual is clearly in a state of crisis,”  he said in the email.

“So why would the WPS be allowed to broadcast their pain and suffering across the internet and to newsrooms across our city? What purpose does this serve?”

Fleisher found it unfair of the police service to use the man’s distress for public relations purposes, he later said in an interview.

“I don’t feel it’s acceptable for a department that we fund to be acting in that manner. I don’t think that it’s helpful,” he said.

“It’s ostracizing for folks who might be in that situation, because you don’t know now — if you’re in trouble or if you’re having an issue of that nature — that first responders … [aren’t] going to tweet photos of it.”

Fleisher is concerned that incidents such as this could deter people from opening up about mental health issues they may face, he added.

The WPS removed the photos in question about an hour after publishing them on social media.

CBC News has contacted the WPS for further comment, but it did not immediately respond.

Blais said she once faced similar criticism for sharing a photo of an incident. While she had consent from the parties in that case, she took the photo down anyway. She hopes the police service remembers that anything it posts can be interpreted in various ways.

She also hopes that, prior to posting, there is a discussion about whether something is appropriate to share and why, and that all involved have given consent before posting.