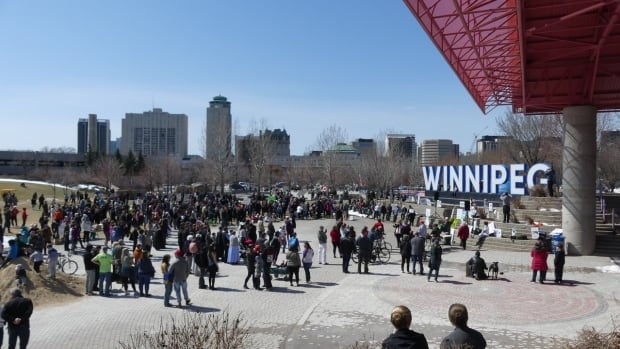 Winnipeg police have made their first arrest of someone accused of violating pandemic public health orders and say there are five outstanding arrest warrants for other alleged repeat offenders.

The arrest under the Provincial Offences Act — a first by the Winnipeg police — and the five outstanding warrants involve allegations of repeated violations of health orders, the police service said Friday.

“A warrant is a higher response than issuance of a ticket. But it is mirrored by the actions of an individual,” Winnipeg Police Service Insp. Nick Paulet said during a Friday afternoon news conference.

The police service works closely with provincial COVID-19 enforcement officials to ensure the cases they pursue have a high likelihood of success when they go to court, said Paulet.

“We rely on the investigators to gather the information and the evidence,” he said. “When we know we have something we can act on, and it’s appropriate, then we’ll take action.”

Canadians have the right to gather, but a public health order that may leave some room for interpretation can make it harder for enforcement officials to decipher who is breaking the rules and who is not, said Paulet.

Anti-masker Chris Saccoccia, otherwise known as Chris Sky, is among the five individuals for whom arrest warrants have been issued, a police spokesperson told CBC earlier Friday.

He has been travelling across Canada to hold illegal rallies that draw hundreds of unmasked people in defiance of pandemic public health orders.

He has already had encounters with police in other cities, including in Toronto, where he was arrested last week.

Manitoba Premier Brian Pallister recently referred to him as an “idiot.”

Manitoba enforcement officials have been ticketing organizers and participants of these rallies for weeks.

Another such rally is scheduled to take place Friday night in Winnipeg at The Forks. A representative with The Forks said staff will be monitoring at the historical site, and public health enforcement officers and the Winnipeg police have been alerted.

Saccoccia was expected to attend but has since suggested on social media he’ll be avoiding Manitoba due to his outstanding arrest warrant.