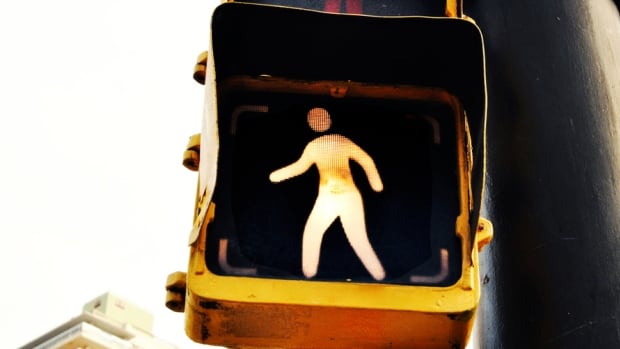 A Winnipeg woman is recovering in hospital after suffering an ordeal she thought would mark the end of her life.

Karianne Wirth was walking her dog on Dec. 29, 2020, in the St. James area. While crossing the street with the walk signal at the intersection of Portage Avenue and Ferry Road, she says she was inexplicably hit with “a sense of dread.”

Moments later, she was struck by an SUV, which dragged and pinned her underneath the vehicle.

“I was being crushed by the vehicle and I thought that was the end of my life,” Wirth said from hospital Friday.

“Luckily, heroes like Drew showed up to change the trajectory of my entire life — and I’m forever grateful for that.”

Drew Ramore, a mobile tire serviceperson, was driving past the scene of the collision. It looked like the “standard crash came to a bottleneck” and he didn’t think much of it, until he saw a pair of feet sticking out from underneath the SUV, he said.

“I did a full U-turn and came bombing on down as quick as I could,” said Ramore.

Used jack to lift vehicle off

Ramore pulled out a jack from his van, which elicited a sigh of relief from the crowd on the scene. But when he was searching underneath the vehicle for where to place the jack, Ramore noticed that Wirth wasn’t moving.

“There was no breathing, so quite a dire situation,” he said.

When Ramore jacked up the SUV, someone else hauled Wirth out from under the vehicle. There was another sigh of relief when she started breathing again, he said.

Wirth is still in the hospital recovering from some broken bones, which she says will be “challenging to heal from.” But generally she’s grateful to be alive.

Meanwhile, Wirth isn’t sure how her dog escaped from the incident, but she did and she ran away, said Wirth. But another helpful Winnipegger, whom Wirth still hasn’t identified yet, walked the dog home, tied her to front steps of the house, and called animal services to check in on her.

“[The dog] was traumatized, but no worse for wear.”