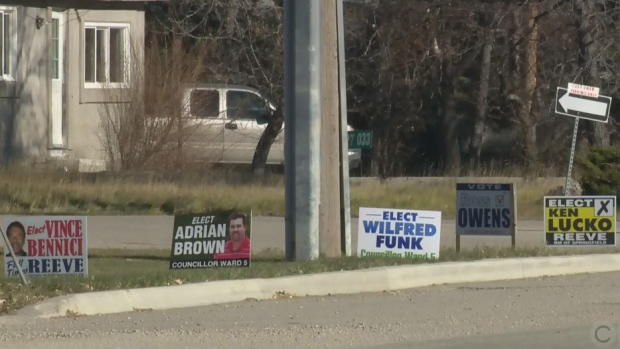 Many candidates across Manitoba are making their final pitch to voters this weekend.

In the Rural Municipality of Springfield, there’s a competitive race for reeve.

From the property of his strawberry farm Ken Lucko is making his pitch to the electorate.

The three-term councillor believes he has the skills to build a better community as its next reeve.

“To reduce taxes, to build a recreation facility for the kids and to bring extra income into the municipality so we don’t have to tax people as high,” Lucko said Sunday.

His rival is incumbent Bob Bodnaruk, a one term and three term councillor before that.

Bodnaruk said he has the best background for the job and is proud of his work creating more public consultation.

“That’s number one as far as the people are concerned,” he said in a phone interview Sunday.

“I’ve put in place a tax stabilization reserve from our gravel sales,” he said.

Also in the running is Vince Bennici, a car wash businessman and former chair of the Springfield Public Library.

Bennici said he sees inefficiencies in the area, and as reeve can help it save money.

“I really believe in this community. I support it. A lot of my customers don’t just come from here, they come from all over the RM,” he said.

Bennici said if elected he won’t take a bigger salary and will do the job full-time.

Tiffany Fell hopes people put her in the top spot after one term as councillor.

Fell, who has a business degree and is a mom, said it’s time the RM is more progressive.

As reeve, she said she would improve business development, communication between the RM and constituents, including through social media and team work.

“Council needs to work as a team, with other council members, community group stakeholders to get things done for Springfield,” Fell said.