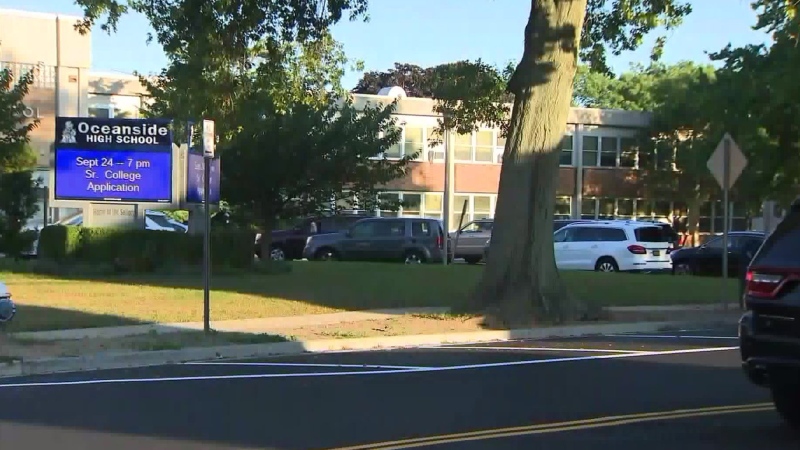 Soon after school let out on Monday, a deadly fight broke out at a strip mall near Oceanside High School in Nassau County, New York. A group of teenagers looked on as Khaseen Morris, a 16-year-old student, was assaulted and stabbed in the chest. Some took out their phones and documented the fight on social media, but no one stepped in to help him.

Morris died from his wounds after being taken to the hospital, according to Detective Lt. Stephen Fitzpatrick of the Nassau County Police Department.

In a release issued Wednesday, police announced that 18-year-old Tyler Flach has been charged with second-degree murder. He is set to be arraigned on Thursday. Police were unable to say whether Flach has an attorney.

At a press conference on Tuesday, before any arrests had been made, Fitzpatrick said it was a “prearranged” fight over a “girl and a perception of who she might be dating or who she might be hanging with at this time.”

“That dispute boiled over here, where a group of six to seven males charged at the victim and his couple of friends, and during that melee, stabbed him,” Fitzpatrick said, standing in front of the strip mall where the fight took place.

He estimated there were between 50 and 70 kids there at the time and said several of them had come forward with information.

Fitzpatrick said he didn’t know what to make of the number of bystanders who failed to assist Morris. “Kids stood here and didn’t help Khaseen. They would rather video this event. They videoed his death instead of helping him,” he said.

In an interview with CNN affiliate WPIX, Khaseen’s sister Keyanna said the assailants “took my brother away from me and my family.” CNN has reached out to members of the Morris family for comment.

Oceanside School District Superintendent Phyllis Harrington said in a video posted Thursday that the district is doing “everything necessary” to protect students and staff. She also asked that parents talk to their children about social media use, cautioning users not to “engage in spreading rumors.” CNN has reached out to the school district for comment.

Nassau County Executive Laura Curran said in a statement that additional police officers would be assigned to patrol Oceanside High School and neighboring schools. “I want to plead with all our residents — not just our young people: If you see someone in serious danger, please use your phone to get help — not likes and shares,” she said.