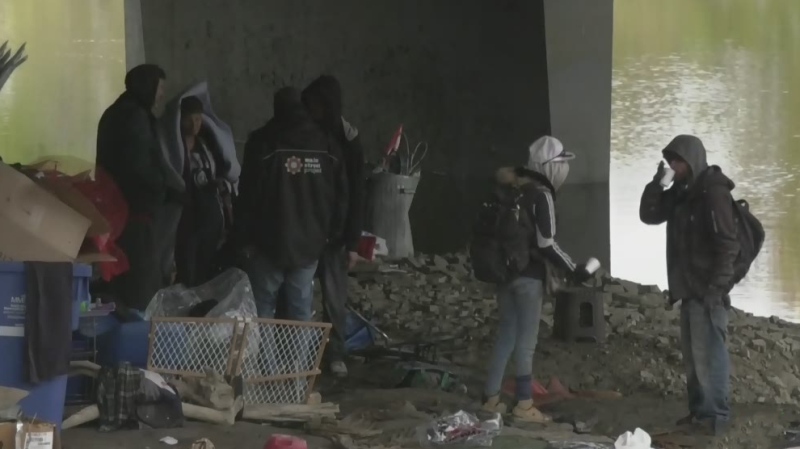 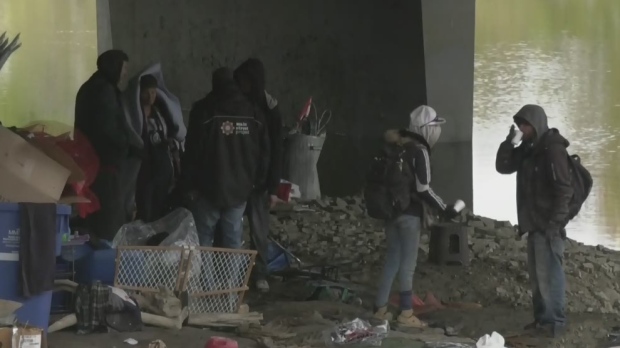 WINNIPEG — There are renewed calls for more affordable housing in the wake of a fire Wednesday morning under the Osborne Street Bridge.

Advocates worry if something isn’t done soon there could be another fire and someone could be seriously hurt.

Some of the people displaced by the fire have gathered at a community ministry in West Broadway.

At the ministry, Elder Corinna Mintuck said the incident highlights a much larger issue — the need to help people find stable housing.

“We need housing for the homeless people,” said Mintuck. “That’s a demand, that’s a need and it’s a crisis going on.”

Numerous homeless encampments have sprung up across the city –- the location under the Osborne Bridge is just one area where people are living. Main Street Project executive director Rick Lees said people in the camps may be living with addiction, mental illness or they may be there because they cannot afford a safe place of their own.

His organization is working with the displaced residents.

“From what we’re hearing from them the biggest feeling of loss they have is community, they’re feeling like how do we stay together?” said Lees. “We’re waiting to hear what they want to do and then our job is to provide the resources or help open other resources to them.”

Main Street Project is currently providing sleeping bags, tents and warm clothing to those in need who lost everything.

Marion Willis’s organization, St. Boniface Street Links, also works with people in the encampments. She worries this fire may not be the last as people look for ways to stay warm with temperatures dropping. While the fire remains under investigation, some of the encampments’ residents have said the fire was started by a candle.

“Today it was tents burning,” she said. “Eventually it’s going to be someone’s life.”

Willis said a new strategy is needed to help people move from the encampments to stable housing.

“People want to be housed,” said Willis. “People would like their circumstances to change. We have some challenges though in that many of the people have taken up to living outside because there isn’t affordable housing and because where there is affordable housing, they don’t feel safe.”

Area councillor Sherri Rollins said the fire has led to many questions and concerns.

“I’ve seen the pictures, too, of people’s items and articles of clothing just burned,” said Rollins. “I’ve got emails from ward residents concerned about what this means for the bridge, the neighbourhood and for those people.”

Osborne Village BIZ chairperson Justin Paquin said the organization is calling on both the city and province to do more to address homelessness.

The City of Winnipeg said in a statement it works with Main Street Project and End Homelessness Winnipeg to provide frontline responses to people experiencing a housing crisis.

The city said its role is limited to cleaning up abandoned items once Main Street Project confirms no one’s living in the camps.

The Winnipeg Fire Paramedic Service has previously responded to fires under bridges and near riverbanks, the city said, but it said there’s no way to confirm if they were connected to the encampments.

The city said if public safety becomes an issue, police will get involved.

Safety’s not a concern for Warren Redhead who stays at a homeless encampment along the Disraeli Freeway with his wife. He said there are no drugs or drinking. He’d rather not live in a tent but plans to stay until he can find an apartment for him and his wife. Redhead said the couple’s on a waiting list to get into a Manitoba Housing unit.

“I think there’s like 20 people ahead of us,” said Redhead.

The Manitoba Families department issued a statement which said, in part, that it’s committed to addressing homelessness, adding Manitoba Housing assesses housing needs to determine who gets housed first.

“People who are homeless have the highest priority in our system,” a department spokesperson said in an email. “There are currently vacancies in Manitoba Housing units, but they may not be where applicants prefer to live, or may not be appropriate for other reasons. Every effort is made to connect clients with housing as soon as possible.”

Redhead hopes in his case that will be sooner rather than later.