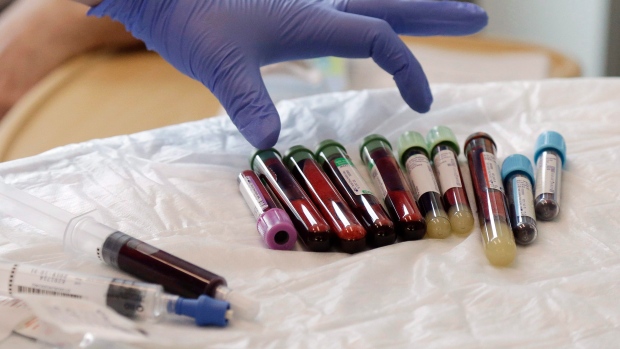 WINNIPEG — CAR-T cancer treatments are proving to be revolutionary for some patients who may not have any treatment options left.

Winnipegger Bob Plamondon is proof. At the end of 2017, he was diagnosed with large b-cell lymphoma, an aggressive form of blood cancer.

He said he did three rounds of chemotherapy, with no success.

“They couldn’t do any more for me so they put me on palliative care,” he said.

In June of 2018, he said his doctor suggested he try CAR-T therapy, but he would need to travel to the Mayo Clinic in the U.S. to get it.

He made the initial trip with family members who acted as caregivers to be tested to see if he qualified. The screening also found some cancer in his brain, but he did eventually qualify to receive the treatment.

“I was really getting into trouble, I had to have radiation treatments just to shrink my tumour to keep me alive long enough to get back down there to have these treatments.”

CAR-T therapy essentially uses a person’s own cells to search out and attack cancer cells.

One biopharmaceutical company that does this kind of work, Gilead Canada, says cells are extracted from a patient, they are genetically modified, and injected back into the patient to target a marker on cancerous cells.

A provincial spokesperson tells CTV News there are several different types of CAR-T therapies specific to different diseases or types of cancer.

“Over the past several years, Manitoba Health, Seniors and Active Living (MHSAL) has been working with our panCanadian Pharmaceutical Alliance to negotiate access to these therapies at the most reasonable cost. Currently, the province covers patients for two different types of CAR-T treatments for a few different types of cancers,” they said in a written statement.

For Manitobans to get access to these therapies, the spokesperson said cases are reviewed by MHSAL in collaboration with CancerCare Manitoba to ensure that the treatment is appropriate for the patient.

“These therapies are complex and are not provided at every Canadian centre,” they explained. “Although these treatments are covered for Manitobans in specific cases, we still need to send patients out of province or even out of country in order to receive the treatment at an accredited treatment site.”

“Occasionally all Canadian sites are at capacity and because the timing of treatment is critical, it is sometimes necessary to find a site outside of Canada for the patient,” they wrote.

Lymphoma Canada applauds provinces that have made this treatment available for patients inside their home province, including Ontario who just agreed to cover the cost of a CAR-T therapy called Yescarta.

“The best way to administer this is within your own province,” said Antonella Rizza, CEO of Lymphoma Canada.

One Toronto hematologist says travelling for care is a problem in the middle of the COVID-19 pandemic.

“It’s a good reminder that healthcare in Canada, at an individual provincial level, there are still lack of equity of access sometimes because funding decisions happen at different times,” Dr. John Kuruvilla a hematologist at Princess Margaret Cancer Centre.

The provincial spokesperson says the number of treatment sites in Canada is increasing and that Manitoba is still reviewing whether or not we will establish a treatment site or continue to send patients out of province/country.

They also said that these treatments are not common and are extremely expensive.

Plamondon says the province does a good job of getting Manitobans CAR-T therapies, but added it would be much easier if it was available here.

“Going away, it’s difficult,” he said.

For two years now that’s been the case and he’s back to his active life, he was so very close to losing.

“I go for walks, I was curling at one time — not anymore but I was curling last year and this year. I am back with it for sure and feeling very good actually.”