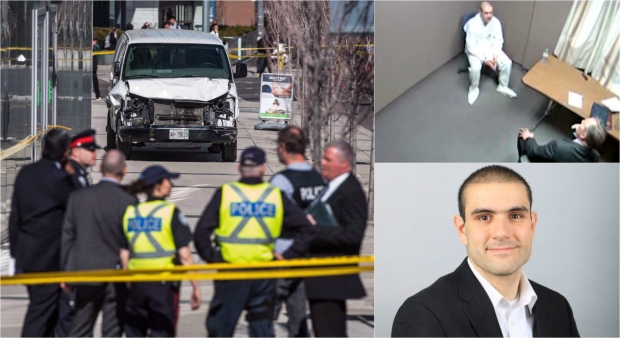 TORONTO — A judge has ruled that Alek Minassian is criminally responsible for the 2018 Toronto van attack, finding him guilty of 10 counts of first-degree murder and 16 counts of attempted murder.

In her decision, which was broadcast on YouTube amid the COVID-19 pandemic, Ontario Superior Court Justice Anne Molloy said the accused had a “functioning, rational brain” and spent a considerable amount of time planning the attack and weighing the consequences.

“He desperately wanted to achieve fame and notoriety,” Molloy said, adding that he believed that negative attention for his actions would be “better than living in obscurity.”

“Even if he only worked this out intellectually… that is sufficient.”

This is a breaking news update. Earlier story follows.

The judge presiding over the murder trial for Alek Minassian, who killed 10 people and wounded 16 others in the 2018 Toronto van attack, will deliver her decision today on whether the accused should be held criminally responsible for his actions.

Minassian has already admitted to driving a rented cargo van on sidewalks along a busy stretch of Yonge Street in North York on the afternoon of April 23, 2018, deliberately striking pedestrians in his path.

During his six-week judge-alone trial over Zoom late last year, the 28-year-old’s lawyers argued that Minassian is not criminally responsible (NCR) for his actions due to his Autism Spectrum Disorder (ASD) diagnosis.

It is believed to be the first time ASD has been used as the sole diagnosis for an NCR defence in a murder trial in Canada and the onus is on the defence to prove its case beyond a reasonable doubt.

The court previously heard that psychosis is the diagnosis used in the vast majority of cases where there is a finding of NCR and psychiatrists for both the defence and prosecution testified that Minassian was not psychotic or suffering from delusions at the time of the deadly attack.

Minassian’s lawyer Boris Bytensky told the court that his client’s ASD manifested itself in a way that created “a perfect storm” to “severely” distort Minassian’s way of thinking.

The defence lawyer was also quick to point out that most people with ASD are not violent and are more likely to be the victim of a crime than the perpetrator.

Psychiatrists for the defence testified that Minassian lacked empathy and failed to understand the true impact of his actions. They said he had become obsessed with school shootings and the manifesto of Elliot Rodger, who killed six people and wounded several others in a stabbing and shooting spree in Isla Vista, California in 2014.

One psychiatrist said Minassian had become fixated on the subject of mass murders and wanted to set the record for the highest “kill count.”

Dr. Alexander Westphal, a U.S. psychiatrist who specializes in autism, was the star witness for the defence and spent several days on the stand, detailing his analysis of Minassian following hours of interviews with the accused after the attack.

Westphal told the court that he believes Minassian does not understand the moral wrongfulness of his actions but noted that criminal responsibility is a legal matter, not a psychiatric one, and stopped short of saying that the accused should be found not criminally responsible.

Dr. Scott Woodside, one of the psychiatrists who testified on behalf of the Crown, said during his assessment of Minassian, the accused told him he knew the public would view his actions as “despicable.”

Woodside added that becoming infamous was part of Minassian’s “calculation,” implying that he had a clear knowledge that what he was doing was morally wrong.

Minassian’s lawyer has said that while his client knew what he was doing was legally wrong, he did not have a complete grasp of its wrongfulness.

“Just because he uses certain magic words… doesn’t mean he understands them at all,” Bytensky said during the trial in December.

It will now be up to Ontario Superior Court Justice Anne Molloy to decide whether Minassian meets the threshold for a finding of NCR set out under Sec. 16 of the criminal code.

Her ruling will determine whether Minassian is sent to a maximum-security mental health facility or a federal prison to serve a life sentence.

Live updates from the proceedings: