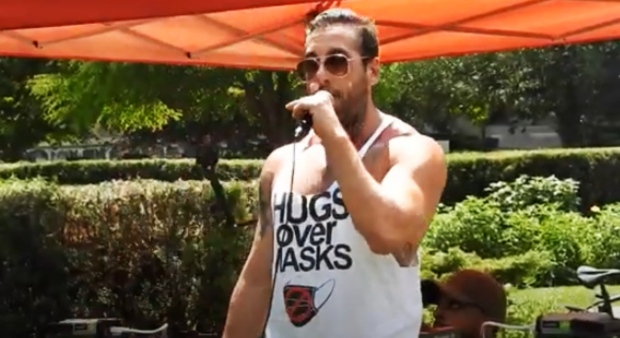 WINNIPEG — Winnipeg police have confirmed an arrest warrant has been issued for Chris Saccoccia, otherwise known as Chris Sky.

Police said in an email to CTV News the warrant is under the Provincial Offences Act.

Sky confirmed the news on his Telegram account, saying he is avoiding Winnipeg, where he was scheduled to appear at an anti-restriction rally on Friday, and is instead in Saskatoon for a different rally.

Police also said one person has been arrested for repeated violations of public health orders.

“There are 5 outstanding warrants yet to be executed in this regard,” said police in an email.

Under Manitoba’s current public health orders, all gatherings with people from outside of your household are not allowed.

Winnipeg Mayor Brian Bowman, speaking at a news conference on Friday, urged Winnipeggers to not attend a scheduled rally at The Forks Friday evening, or any other rallies to break the public health orders.

“Go home, it’s that simple,” he said. “Don’t go to events like this that are intended to violate the province’s public health orders. There are consequences.” Currently, people can be fined $1,296 for violating public health orders, and can also be fined $298 for not wearing a mask in public.

He added attending these events not only puts your health at risk but shows, “a tremendous amount of disrespect to Winnipeggers and Manitobans who are following the rules.”

“They’re tired and they’re exhausted from having to live in this reality that we’re living in right now,” Bowman said. “When they see these events happening, it definitely rattles their sensitivities and it frustrates them.”

In an email to CTV News, the province said it couldn’t confirm if an injunction had been filed for any anti-mask or anti-restriction rallies.

The province also wouldn’t say if there are any plans for enforcement for the rally at The Forks.

Saccoccia has been a prominent anti-masker attending rallies throughout the country.

He was recently charged with three counts of uttering death threats, one count of assaulting a peace officer with a weapon, and one count of dangerous operation of conveyance in Toronto after he allegedly threatened to kill Ontario Premier Doug Ford along with all of Canada’s other premiers, as well as driving a vehicle at a police officer who tried to arrest him.

Saccoccia was released on bail and had agreed to stay with a surety in Markham, Ont. The charges have not been tested in court.

With files from CTV’s Charles Lefebvre and Chris Herhalt.