A bear spotted in Winnipeg early Saturday morning has been euthanized after it was shot by a Winnipeg police officer.

Winnipeg police told CTV News officers received two different calls regarding bear sightings in the city Saturday morning. The first call came in shortly before 2 a.m. on Kildonan Meadow Drive in Transcona. However, when officers arrived the bear was gone.

Police received a second call about a bear sighting in the 800 block of Talbot Avenue a few hours later around 4:45 a.m. Police could not confirm if this was the same bear from the first call.

Winnipeg police confirmed the bear was shot by one of the responding officers. Police said the bear then ran up a tree where it remained injured until Manitoba Conservation officers arrived a few hours later.

“The concern for public safety was slated as their primary reason for their course of action due to the time of day and the agitated state of the bear,” Const. Claude Chancy, a public information officer with the Winnipeg Police Service, told CTV News in an email.

Nicole Sauve, who lives on Talbot Avenue, told CTV News she woke up early Saturday morning to what she described as a big bang.

Sauve said she was told by officers to keep her family and pets inside her house because there was a bear up the tree in her back yard.

David and Lorraine Jacobson who also live in the area and said they too heard what sounded like gunshots around 5 a.m. Saturday morning and saw police in the area.

“They were having spotlights all through the trees,” David said.

Sauve said police allowed her to leave the house later in that morning with her kids for a few hours. When she returned, the bear was out of the tree. 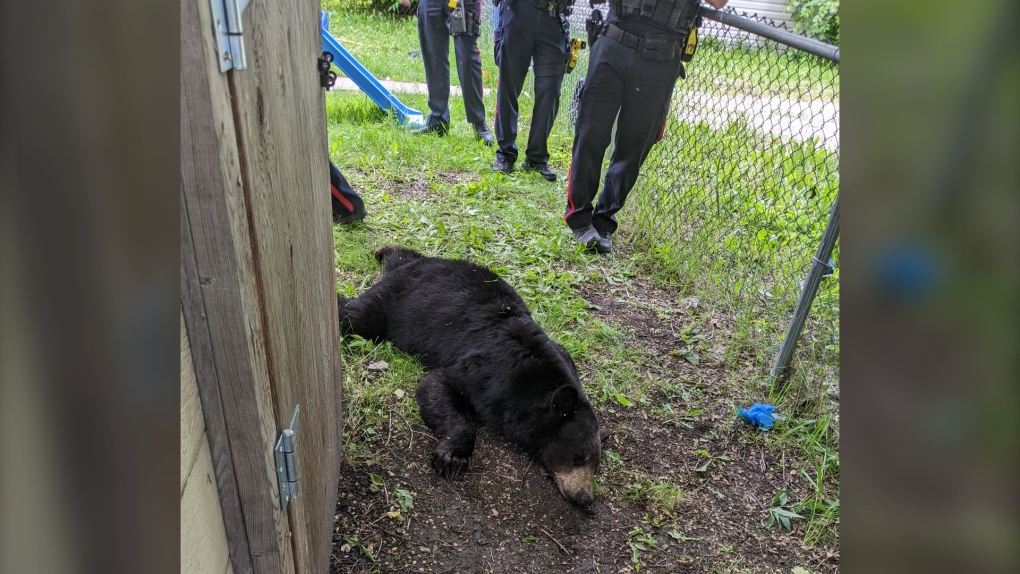 A bear is pictured here after it was tranquillized by Manitoba Conservation officers in Winnipeg on June 18, 2022. The bear later had to be euthanized as a result of injuries after it was shot by a police officer. (Submitted: Nicole Sauve)

“They had tranquillized the bear and it had fallen out of the tree onto our shed and then I guess they got it down onto the ground,” she said, adding the bear was later put in a bear trap and taken away by conservation officers.

A provincial spokesperson told CTV News that conservation officers responded to a call from Winnipeg police about an injured bear in a tree in the Elmwood area of the city.

“The animal was tranquillized and safely removed from the area,” the spokesperson said in an email.

The spokesperson said due to the extent of the bear’s injuries, it had to be euthanized.

Lorraine said in the 36 years she and her husband have lived in their home, they have never seen a bear in the area before. She said it is terrible how the situation ended, but realized there were safety concerns as there are children that live in the neighbourhood.

“It’s just unfortunate that the poor bear went the way it did. But there’s so many children in the community that safety is more important,” she said.

Sauve said she is upset at how the situation was handled.

“The fact that they had to shoot at it around my house,” she said. “The fact that it had to be euthanized, that it was injured like that. I think they could have found ways around that.”