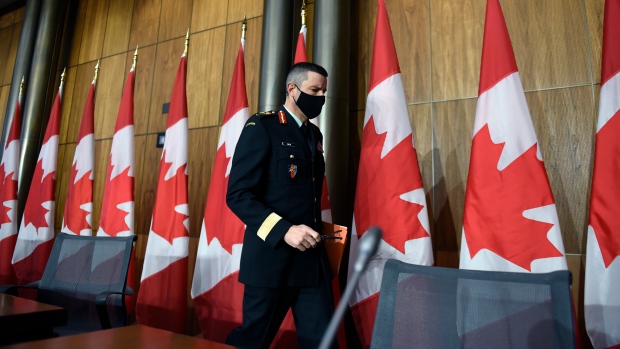 OTTAWA — After weeks of dose shortages, the federal government says it will still be a few weeks before Canada’s Pfizer deliveries fully ramp up to pre-interruption levels, while Moderna’s next shipment has yet to be confirmed.

Maj.-Gen. Dany Fortin announced Thursday that Canada is expected to receive approximately 70,000 Pfizer-BioNTech doses next week, and that the number of doses coming in the next Moderna shipment slotted for the week of Feb. 22 is expected to be impacted, but how severely remains unclear.

The number of doses Canada’s been able to administer over the last few weeks has been affected in large part by Pfizer significantly reducing the number of doses it has been sending as it scales up its European facilities. However, Moderna — the second and only other currently approved COVID-19 vaccine in Canada — has experienced recent production problems resulting in slightly reduced deliveries to Canada.

In an interview with Reuters on Thursday Prime Minister Justin Trudeau chalked these shortages up to “’momentary disruptions,” promising Canada is still on track to see tens of millions of vaccines arrive in the months ahead.

This week, Canada received and distributed 79,000 doses of Pfizer-BioNTech to the provinces, and Moderna has sent 180,000 doses to be distributed in the coming days to sites in northern, remote and isolated communities.

Before Pfizer’s delivery delays were announced in January, Canada was planning on receiving up to 367,575 Pfizer-BioNTech doses this week, and this week’s Moderna shipment was supposed to include 230,400 doses.

Fortin said that Pfizer plans to scale up shipments later this month, forecasting shipments of at least 335,000 doses the week of Feb. 15, and 395,000 the last week of February.

Canada was expecting to receive 249,000 Moderna doses in the Feb. 22 shipment, now the government does not expect to receive that amount, “for a number of reasons” which Fortin did not elaborate on.

In a statement to CTV News, Moderna Canada’s Patricia Gauthier said that while it is still ramping up its European facilities, Moderna “fully expects” to meet its delivery obligations to the Government of Canada.

“Moderna confirms that as it scales manufacturing, it is on track to supply the next three months of deliveries and meet its Q1 and subsequent contractual commitments. Moderna remains in close contact with our federal government partners, recognising the importance of delivery planning for vaccination rollout,” she said in the statement.

Amid concerns over the potential impact on Canada of the European Union’s export control policy on all vaccines produced in EU member countries, the federal government made a point of noting on Thursday that so far, no shipments to Canada have been impacted as a result.

Fortin, who is leading the logistics of Canada’s vaccine rollout, vowed to keep the provinces and territories abreast of the evolving situation.

“I completely understand that it’s making it more difficult for provinces to prepare clinics and prepare the vaccine distribution sites,” said Fortin.

Shortages have left Canada’s front-line vaccine administrators with fewer doses to dole out than they planned for. This resulted in shifting prioritizations to inoculate residents and staff in long-term care homes, and delayed appointments for some front-line health-care workers waiting for either their first or second dose.

The government continues to state that by the end of March, Canada will meet its target of administering a total of six million vaccine doses, enough to fully immunize three million people, as part of the “Phase 1” vaccine rollout before opening up eligibility to millions more Canadians in the spring.

“Phase 2 of the vaccine rollout, the ramp up, will see a significant increase in vaccine supply across Canada. We’re expecting 20 million doses of authorized vaccines to be available in the April to June timeframe,” Fortin said.

Amid the reduced shipments Canada has fallen behind several countries in rolling out its mass vaccination campaign when compared on a per capita basis and the federal Liberals have faced a continued grilling from the opposition parties over their procurement approach and lacking domestic capacity.

In an effort to bolster future domestic production, Trudeau announced earlier this week the federal government had signed a “memorandum of understanding” with U.S.-based Novavax to pursue options to produce its COVID-19 vaccine at a new Montreal facility. However, that site is still under construction and vaccine production there isn’t expected to be able to start until this fall at the earliest.

There are other Canadian facilities working to scale up as well, but they aren’t expected to be ready to be making doses until next year at least, meaning they aren’t set to play a role in the current and pressing pandemic vaccination campaign.

“Canada likely won’t be producing vaccines here at home until 2022. Now we are learning that Moderna’s scheduled shipments for later this month, are also up in the air. Much of this uncertainty is due to the failure to plan by the Liberal government,” said Conservative Leader Erin O’Toole on Thursday.

Seeking to defend Canada’s position while testifying before a House of Commons committee digging into Canada’s vaccine capacity, Procurement Minister Anita Anand told MPs that her department “proactively and repeatedly approached leading vaccine manufacturers with offers to leverage this domestic capacity and possibility here in Canada.”

However, all of them turned the offer down, citing a desire to make vaccines in existing plants that were shown to be able to manufacture at a global scale.

“We took this issue up with suppliers, at every turn at the negotiating table to discern whether they would come to the table with this possibility of domestic biomanufacturing. The manufacturers reviewed the identified assets here in Canada, and concluded that biomanufacturing capacity in this country at the time of contracting—which was last August and September— was too limited to justify the investment of capital, and expertise to start manufacturing in Canada,” she said.

Amid the reduced shipments Canada has fallen behind several countries in rolling out its mass vaccination campaign when compared on a per capita basis and the federal Liberals have faced a continued grilling from the opposition parties over their procurement approach and lacking domestic capacity.

As of Thursday morning, more than 1.1 million doses have arrived in Canada, resulting in nearly 872,000 first doses and 136,000 second doses being administered, according to CTV News’ vaccine tracker.

Though, there could be millions more doses on their way to Canada in the near future, if Health Canada grants regulatory approval to either the AstraZeneca or Johnson & Johnson vaccine candidates.

While the precise timing of Health Canada’s anticipated approval of these two vaccine candidates remains uncertain, it’s possible that new authorizations could come before the end of March, while the Phase 1 rollout is still underway.

Fortin said that contingency plans are being put in place to handle the addition of other vaccines into the logistical planning process, stating they are plotting out “multiple scenarios” that factor in seeing provinces able to leverage clinics and pharmacies as options for future vaccine administration sites.

“We have made projections available to provinces with regards to what we expect to see in terms of additional quantities and additional vaccine candidates,” Fortin said.