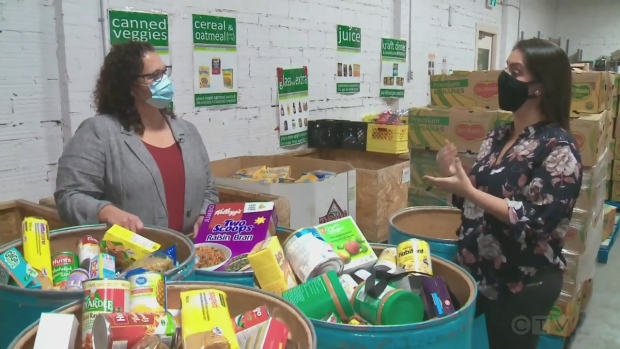 TORONTO — Canadian charities and food banks are struggling to help the millions of vulnerable citizens who are relying on their services more than ever.

Nearly 70 per cent of Canadian charities are dealing with a drop in donations and 70 per cent have fewer volunteers compared to the start of the pandemic.

“What we’ve seen just from a numbers perspective in Toronto, is about 65,000 clients visits every single month pre-pandemic, and that number has skyrocketed to over 110,000 every single month,” Neil Hetherington, CEO of Daily Bread Food Bank in Toronto.

Last year, Canadians donated $17 billion to charities, but this year they could see up to a 37-per-cent drop in donations due to the pandemic.

“The entire charitable sector is being affected through the loss of special event revenue, door-to-door canvassing, in-person meetings with major donors,” says Bruce MacDonald, president and CEO of Imagine Canada.

Some organizations are trying to tackle that shortfall by taking their fundraising efforts online, but with more people needing help, charities are seeing an increased demand compared when the pandemic first began in March.

According to Imagine Canada, nearly 46 per cent people more are in need of a helping hand compared to last year.

In Ottawa, food banks are almost empty, but cash donations have actually gone up. Still, the demand is increasing.

“We’re seeing people who would never imagine that they would need to turn to a food bank and this pandemic shows how close people are needing the services,” said Rachel Wilson, CEO of the Ottawa Food Bank.

The United Way in eastern Ontario said that as more families continue to stay away from relatives and in their safety bubble, the sense of isolation is taking a toll.

“In the month of November, there was a 114-per-cent increase for calls for mental health,” said Michael Allen, United Way Eastern Ontario president and CEO. “Food supports have remained steady throughout the course of the pandemic.”

As more charities are stretched thinner, there’s a growing concern stress on the system may be affecting the mental health of the volunteers that keep the charities running.