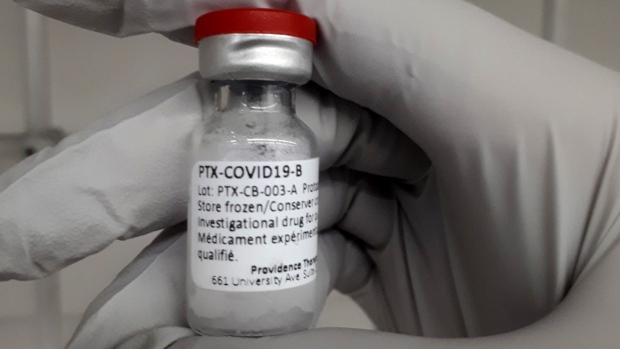 TORONTO — A Canadian drugmaker has posted promising Phase 1 trial results for its own COVID-19 vaccine, but is threatening to move its future trials and production out of the country if it doesn’t receive further support from the federal government.

On Wednesday, Calgary-based Providence Therapeutics released results from its Phase 1 trials of 60 participants aged 18-64 that show “strong virus neutralization capability” with no serious side-effects reported, according to a news release.

Participants in the Phase 1 trial were given either a placebo or Providence’s vaccine in one of three dose sizes. After 28 days, participants given any of the vaccine sizes showed COVID-19 antibodies, while all doses showed 100 per cent COVID-19 “blocking activity” after 42 days.

“We’ve always known since Day 1, that we know how to make a good vaccine, we’ve been doing it for years in cancer,” Brad Sorensen, CEO of Providence Therapeutics, told CTV News.

“We’re extremely happy and vindicated that we’ve produced this very, very good vaccine and we look forward to going head-to-head against Pfizer and our Phase 2 clinical trial.”

The data from Providence Therapeutics has yet to be published or peer reviewed.

Similar to the vaccines from Pfizer-BioNtech and Moderna, Providence’s vaccine is of the mRNA variety, with two doses of the drug given 28 days apart, but Sorensen believes his vaccine has the edge over the already approved options.

“We’ve shown on every measurable scale (that) we are equal — or appear to be superior — to either one of those vaccines at the same stage during their development,” Sorensen said.

To test Sorensen’s belief that his vaccine is comparable to the others, he’s asked the federal government to supply him with 500 doses of Pfizer’s vaccine so the company can compare results, but to date has not received an answer.

Providence is committed to conducting its Phase 2 trials in Canada, but Sorensen said dealing with the federal government has been trying so far, to the point where he is now considering moving future trials outside the country, and to shifting production of the vaccines elsewhere as well.

“They’ve had access to the data that we’re sharing publicly for a while now. It was blinded, but it was perfectly clear how good our vaccine was,” he said.

Sorensen said he’s heard from several countries – some in Europe and elsewhere — about the possibility of shifting operations to another locale.

“At the end of the day, if Canada has no inclination to purchase vaccines that are made in Canada, which they’ve so far given no indication that they’re prepared to do that, then why would we spend the resources to seek approval in Canada?” he said.

Sorensen said his Canadian facilities are capable of producing 200 million doses of their vaccine every year, and in a time when the world should be ramping up vaccine administration, that capacity could really help.

“The world needs more capacity, so we’re going to keep making that in Canada as long as the world needs it,” he said. “Will we keep that manufacturing in Canada in the long term, after the crisis has passed? I’m not going to make any promises to a country that hasn’t done anything to support us.”

Health Canada and the National Research Council of Canada have not responded to requests for comment.