WINNIPEG — Another Winnipegger wants answers from the city after his mother was charged thousands of dollars more than usual on her water bill.

Henaire said he checks the metre for his mother and has been helping her with that for several years.

The metre was replaced back in 2001 and Henaire said in the 19-year timeframe his mother has used just under 700,000 gallons of water.

“The bill she got just the other day was for 859 cubic metres, almost 189,000 gallons of water. So roughly 27 per cent of the total usage of the entire time she has had that metre was in the last 104-day billing cycle,” said Henaire.

This is not the first time a Winnipegger has received an irregularly high water bill. As CTV News previously reported, Kim Heinrichs received a water bill nearly 20 times higher than her last one.

Henaire said when he saw the bill he called the city and was told the same thing as Heinrichs, which was to check for leaks and if he wanted someone to come check the metre he would have to pay for it.

“Roughly $100 to get your metre checked. I am more of the opinion that hey, it’s your metre, you guys figure out what went wrong,” he said. “I did a little bit of math on it; she would have had to flush her toilet 47 times an hour for 104 days straight to use that kind of water. So clearly there is a problem somewhere.”

He said there is no way a single dwelling household that has two people living in it should have a water bill that high. He added that his own house has a pool which had a leak once and his bill was never that high.

After talking with the city, Henaire said he has paid some of the bill—$700 worth—but only based on what the bill should have been. 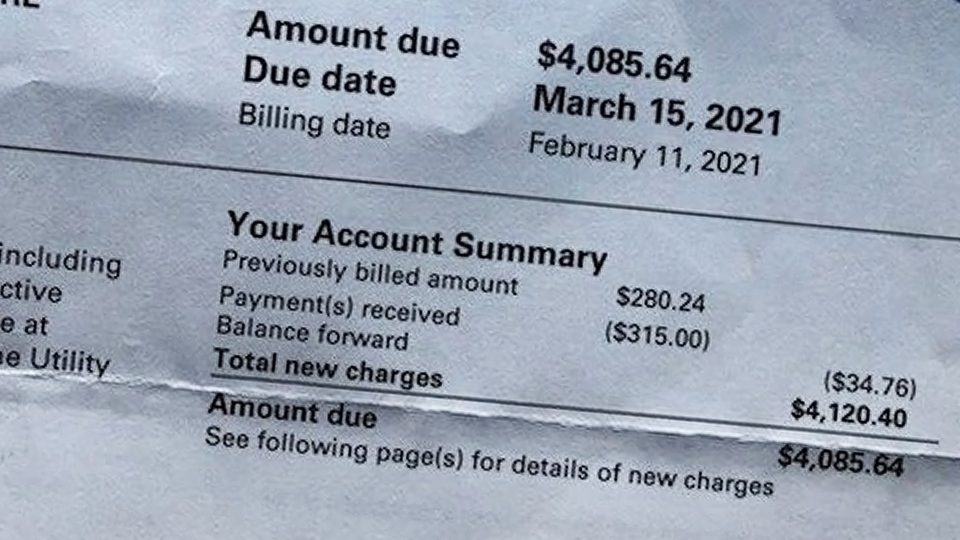 He added when mistakes are made on bills that are this large, the city should automatically have a rule in place where the individual pays what the average has been in the past until the problem has been resolved.

In an emailed statement to CTV News, the city said if someone sees a jump in their water bill, it could be due to a leak.

Henaire said he had checked for a leak and added his mom’s toilets were both replaced last year.

The city had previously told CTV News if there is a water leak, customers could apply for a Water Leak Credit program.

Henaire said this will probably be his next course of action, but he thinks when there is a bill this high, more should be done.

“They have to be able to look at that and say, ‘okay something is definitely wrong.'”